“We were fairly flexible, about how we enabled people to choose the right work and home life balance for them”

An interview with this year’s Best use of Tech winner; DMSL 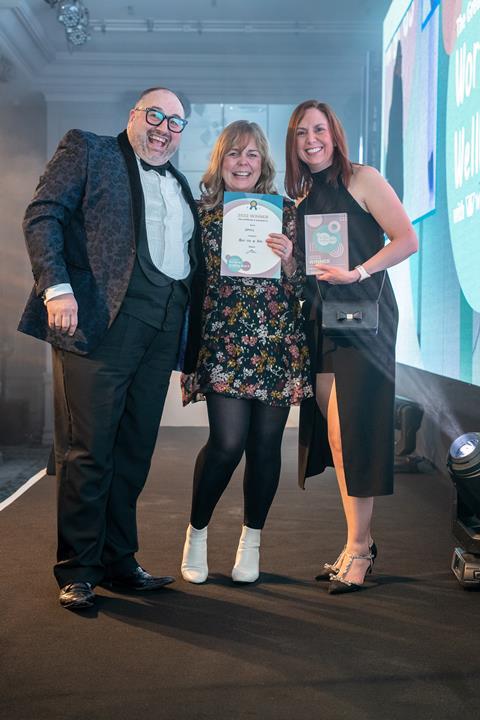 To recognise the strategic importance of wellbeing, DMSL included wellbeing in their 2020 business plan - introducing workplace wellbeing workshops, and one-to-one coaching. DMSL has always recognised that its team is at the heart of its success. The aim of their wellbeing journey is for employees to recognise that their wellbeing is just as important as all other aspects of their work.

Using a number of online services to support their staff during lockdown, and after, DMSL ensured that every service was reviewed to allow their employees to communicate effectively, collaboratively, and most importantly that they felt connected and supported whilst working through uncertain circumstances.  Using these tools and services has enabled DMSL to enhance its employee wellbeing and create a supportive, inclusive, fun and friendly environment - ultimately leading them to be awarded Best use of Tech at this year’s Great British Workplace Wellbeing Awards.

We caught up with Susan Turnbull director of HR at DMSL to discover what workplace wellbeing truly means at DMSL, what winning meant to them, and how they plan to continuously improve the wellbeing practices.

Discussing why DMSL was awarded the ‘Best use of Tech award’, Susan gave us insight into their journey with tech, and how the use it, along with other elements, has helped them build an effective workplace wellbeing strategy.

“Before the pandemic struck us, we were already what we now call a hybrid working team. So we worked part of the week in an office, and part of the week, in our homes. We were fairly flexible about how we enabled people to choose the right work and home life balance for them.”

She also explained how the transition into the use of tech during the pandemic, wasn’t a difficult one for them, as it was for other businesses - due to the position they were already in e.g. using online platforms such as google workspaces, and having team members already used to working in a hybrid model.

“We had up-skilled the team ahead of the pandemic, so when the pandemic struck, being able to switch over to virtual communication and virtual platforms wasn’t quite business as usual, but it certainly wasn’t as unusual as it had been, perhaps in other organizations. We also had the magic of Slack which is great. We already had a team of people that were familiar with using Slack for both personal conversations and business conversations, so I think because we had technology as one of the tools, it was relatively straightforward for us then to say, how can we now up our game a little bit and use technology even more to benefit the team.”

As a team that was already well equipped tech-wise, Susan went on to tell us how they used this to create a strong wellbeing strategy, and how they are using tech to benefit their employees’ mental and physical health.

“Our CEO completed something called a Workplace Resilience and Wellbeing Assessment, we then offered that facility out to the team, which provided us with a diagnostic report about our business and how well our business was doing from a wellbeing point of view. One of the suggestions that came out of that, from the team, was that we set up something called ‘The wellbeing’s’ which is a wellbeing forum, and we had nine people that offered to become a part of ‘The wellbeing’s’ - and that all happened at the start of the pandemic. So, as a team we completed the assessment in June, we established the wellbeings forum in August and the wellbeings chose to have three key initiatives for the next year.”

“One of the three initiatives was to use technology to support wellbeing - and that was the start of our technical journey around wellbeing.”

DMSL’s ability to listen to their employees, and put together an initiative that encourages their own employees to be at the heart of their wellbeing practice shows a clear reason why they were championed at this year’s awards show - so we were really interested to know of what more they’re planning to do to encourage positive wellbeing, and any future initiatives they have planned.

“The second thing that we agreed that we wanted to focus on was sleep, and sleep awareness. In June, we’re going to invite a guest speaker called Haley Humble to run a series of wellbeing programs for us on a virtual platform.”

One of the many ways that DMSL encourages positive wellbeing is through physical activity, and their team’s social activity is really important, “We currently do a lot of social and physical activities. So on our team Slack, we’ve got a running channel, we’ve got a walking channel, a cookery channel, you name it, we’ve probably got a channel for it. So the socially active community have just tested something for us called Count It. It is a platform that can integrate into Slack, which will enable people to measure their activity, whether that be walking, swimming, running, or cycling - creating a bit of a league table. It allows us to open up a bit of in-house competition, but also allows us to track the physical activity of the team over say a six-month period.”

Introducing this sort of technology will also encourage new lines of communication between the team, which is always positive!

Susan also explained that they have signed up for an initiative called the Mental Health at Work Commitment which has an action plan that allows a business to audit all internal approaches to wellbeing. “Four of The Wellbeings are joining me to go through that audit process so that we can assess what we’ve got in place, our wellbeing point of view and what we’d like to put in place in addition, or indeed just supplement what we, already have.”

Clearly, DMSL has wellbeing at their forefront and allowing their employees to be the driving force for change, shows that they truly care about their employees’ wellbeing, and how the workplace culture is affecting this. Because of this, we were eager to find out what winning this award meant to the team at DMSL.

“Winning the award allowed us to celebrate the team efforts, including everybody involved in wellbeing at DSML” said Susan.

“It cemented the fact that somebody externally acknowledged how hard we’ve worked. And actually when you read our entry, and the evidence that we have to support what we’ve done, winning this award was kind of the final tick in a box for us” she continued.

Lastly, we asked Susan, ‘so, what makes DMSL a great place to work?’

“Well, that’s a really easy answer,” she said, “That’s each and every member of the team that works here. If you went out and spoke to any one of them, they would tell you what a lovely place it is to work. And they would tell you how lovely each and every one of us are. And that sounds quite soft in this tough business world, in which we work, but by being lovely I think what they really mean is that we genuinely care about one another and if anybody needs help or support, they know that somebody in the team will do that.”

“One of the questions we have in the staff survey that we do each year is how comfortable are you in having a wellbeing conversation with a colleague? And 93% of the team said they feel comfortable having that conversation. That to me is what makes DMSL such a special place to work” - and we couldn’t agree more!