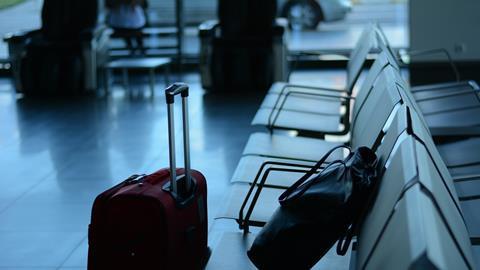 About four years ago, my company took part in a healthcare event in Harrogate. I secured a nice little deal at the deliciously luxe Hotel du Vin and after a hard day’s graft, made my way to dinner.

At the time, my tiny home was full to the brim of teenage daughters’ friends, every day a unique take on TV great, The Young Ones. I minded not the languorous, lanky lads lounging in my living room, raiding my fridge and generally hanging around in cacophonous fashion. I loved (most of) them.

Entertaining, erudite and astonishingly polite, they were fun to host; but the prospect of some solitary quality time was more than welcome.

Here, in the dimly lit dining room of The Vin, I surreptitiously slipped off my heels and stretched my toes. I lowered my shoulders and felt the muscles ease. I closed my eyelids and breathed deep.

Bam! A rush of air, a slap of paper upon cloth set me upright and alert.

My gentle evening was transformed into a self-conscious indeed awkward event, with well meaning but misguided waiting staff bumbling around every few minutes asking if I was ok. Yes, yes, I really WAS ok.

An annoying yet comparatively minor event. Comparative that is, to one that took place about ten years earlier. A client’s party I had organised necessitated staying in a Substantial Hotel in London’s West End.

Ascending the lift after lunchtime check-in, I chatted to a fellow-guest, as you do. We alighted on the same floor, strolled up the corridor and it transpired that he was in the room next to mine.

Much (much) later, returning from my party after midnight, I settled into bed, exhausted and drifted off. The room phone rang. I lifted the receiver:

Management was duly informed and my drunk neighbour ejected from the hotel. But not before I endured heart palpitations and self-retribution. Had I somehow invited this? Was I too friendly? Did I give the wrong impression? No to all: I was relaxed and civil and just how much of a come-on can you give to a less-than-attractive man over three minutes in a lift at 2pm?

With this kind of experience under one’s belt, one learns very quickly that larger quality hotels vary in quality. The majority are superficially lovely with seductive websites and, occasionally, an established name.

The De Vere New Place near Southampton is one such. New Place boasts a gorgeous building, clubby bar, elaborate dining room with scrumptious food and an absurdly good wine list. But motel standard pre-fabs lurk behind the luxury description and building façade; in truth, endless homogenous landscaped avenues lead into layer upon layer of low-grade, low-rise modular B&B world. Soundproofing between rooms is as minimal as the space within.

For one night only, none of this mattered much; what did, however, were the shower controls, or lack of them. And the soundproofing.

In summary: the night’s work-related wakeful worry was punctuated by uncontrolled, sonorous mating cries from the room next door. The “uncontrolled” theme morphed into a shower episode that saw your author compelled to break into a most undignified dance, dodging the alternately scalding / freezing water cascading from the shower at an ungodly, early hour.

I never did get the damn thing to work and my well-shampooed, under-rinsed hair did me less than proud that rather important day.

The Britannia in Manchester: a faded mistress of a hotel, whose frayed, formerly fancy skirts reveal too much; in this case too much imperfection, too much carelessness, too many members of staff who simply couldn’t give a damn, a room that was mouldy, less than fragrant, and well, just super-shabby.

The Britannia Hotel mindset was thrown into focus upon arrival, when my reservation confirmed through laterooms.com was apparently lost. The unhurried, unapologetic receptionist blamed “The Hurricane.” “What Hurricane?” “There’s been a Hurricane in New York! Didn’t you know?

It has stopped e-mails from reaching us!” Wonderfully, my Man-on-the-Ground in Manchester assured me that laterooms.com is run from a building in … Salford.

I decided henceforth, to opt for smaller, independent accommodation and investigated The Noir in York whose website assures prospective guests that they can “Dine and sleep in style.” Noir style included thin towels so small they couldn’t dry a cat; the gentle scent of myriad weary guests pervaded the room. Downstairs: no bartender, a closed restaurant and a receptionist who confessed he was a student from Australia and didn’t know one end of York from the other … he had no idea where we might eat. “Good luck,” was all he had to offer.

Due back in Manchester, I tracked down another independent gem, The Mitre. The website offers modest, apparently well appointed hotel rooms that sit happily within the budget of a small business, not prone to lavishing its travel budget needlessly. Oh, God bless The Mitre.

In transit, courtesy of a substantial Virgin train fare (wi-fi is extra), I exchanged text messages with aforementioned Man-on-the-Ground. The first part of his diatribe lifted my spirits: “The Mitre? George Melly always stayed there.”

The second part sunk them: “He reveled in the shameless shabbiness of possibly the worst hotel in Manchester. For that, he loved it.”

I arrived at 7pm. The check-in, apart from having to drag my case up two long flights of narrow uneven stairs, was seamless. Restaurant open until 9pm and hotel bar (such as it was) until 5am. I dumped my case within the unprepossessing (premier-cathedral-overlooking-more-expensive-than-the-other-rooms) room, and took a seat in the restaurant (such as it was).

At precisely 7.20pm I was instructed: “The kitchen is closed.” Why? “Because it is quiet. No point.” “But I’m a guest in the hotel …” A shrug, combined with the back of the shrug-owner, closed the conversation. Zizzi, a usually reliable fed-up business traveler’s dining destination anywhere in the UK, didn’t help. Here: a table out of sight against the wall, three of the limited tapas dishes “off” … and a deficit of green beans. No green beans.

Let me tempt you back to my bedroom at The Mitre – but please, don’t get optimistic. I have learned that every hotel room features a hidden enemy, something to keep you on your toes. Here, the cupboards took me by surprise because under the cover of dark, gravity lulled ajar every door and drawer, creating an unexpectedly hazardous, bruising thoroughfare to the loo during the night.

The Mitre, however, had more to offer than most. Adding discombobulation to a blurry 6am start, on lowering the shower-head to my height, the whole sorry affair came away from the wall into my hands. George, where are you now? I needed your company badly; you could have made this fun.

I am a traveling female executive: the CEO of Forte Medical, an SME with grand things ahead and I need to traverse the UK to achieve them. I cannot be alone; there must be myriad small businesses out there with a need for good, well-priced, well-designed but simple places to stay.

We want to rest in places that are not anonymous, that are friendly, that are comfortable, that don’t fall apart or smell; places that look and feel good, where fellow-guests are unlikely to be monsters. Places where we can relax happily and face the next day afresh. I know the rest of Europe can do it, so why can’t we?

The traveling business life is a lonely life: independent hoteliers of the UK, shape up, do your job. Those of you who can seize the moment please listen: now is the time to stand up and be counted.

And if I come to stay, please … make my room a damn good one.