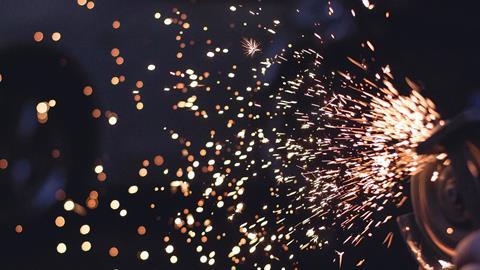 It seems like everything these days comes from somewhere else, sales of UK manufactured products have been consistently falling. Is it looking grim for the local market?

It’s probably not a surprise to you that down your local, most things aren’t local. UK manufacturing sales have been on a steady decline the past few years, the ever-cheaper prices of mass-produced imports are having a drastic effect on local goods. Though, what was once a widely accepted cheap alternative is now raising questions about sustainability, among others.

Said questions were asked to the most recent roundtable of UK manufacturers, entrepreneurs and experts, hosted by the Great British Entrepreneur Awards and haysmacintyre, who tell us how to make manufacturing in the UK more achievable.

We certainly have the means in the UK to make high-quality goods, but what’s keeping us from the ends? Despite our perfectly capable manufacturing industry, it’s sad to see the consistent drop in sales of British goods.

“When it comes to exporting if your product isn’t high value enough, especially after Brexit, it becomes difficult to do,” says Matt O’Crowley of Tanki, further explaining that the reliance on goods such as toilet roll, especially after lockdown are one of the primary reasons for cheap imports being favoured.

“We need to start thinking a bit more broadly, make supply chains easier to manage,” finalises Matt. Matt continues to clarify that while we do make some astonishingly high-quality goods here in the UK in a variety of industries, changes must be made to see some success.

With a plethora of advancements being made in every industry, many manufacturers in the UK have boldly stated they intend to strive towards the government’s new net-zero target. Pre-COVID numbers alongside what we’re seeing now indicate a huge adoption of change among manufacturers in the UK through the use of tech to forward sustainability targets and increase profits.

But is digital the way forward? Are some manufacturers holding themselves back if they’re not implementing tech in their production lines? “Yes, digital is the way forward for UK manufacturing,” says Shelley Lawson of Frog Bikes, tech needs to be adopted and fast if our own manufacturers hope to keep up with increased demand and the increasingly competitive market.

Discussing her own business, Shelley outlines the process of making her product, describing a series of steps that include welding parts onto a frame. Shelley says that in China, the process is “relatively cheap to do, due to labour,” however in the UK, to stay competitive “we need to rely on robotics to do that.”

It’s one thing to provide your goods locally, but when it comes to the world at large, you need to export. Providing your goods on a much larger scale while amazing for your business can present a litany of issues, cost being one of many, especially if you’re aiming to keep your manufacturing UK based.

Sandra Murphy of Equidiet is one such business, aiming to provide her impressive product to the world, but facing troubles in the larger market: “The problem is that we’re small,” she says, “we can’t compete with the larger companies who have all of the sponsorship deals and things like that.”

In some circumstances, it’s unrealistic to grow your business without external manufacturing. The costs associated with solely providing your product from the UK to the world at large are exponential and will severely harm growth of your business, “we need to be looking at scaling up in the UK as well,” says Sandra, pointing out that while it may be difficult to stick to your roots, it’s not unrealistic to scale-up at home alongside growing across the globe.

With attitudes changing not only among consumers but businesses, many are beginning to look local for manufacturing their products. Not only is there a benefit to providing local goods to the local population in terms of sustainability, but there’s the added benefit of giving the economy a much-needed boost, especially after lockdown.

“You have to look beyond costs when making in the UK, you need to be looking at the other benefits,” says Kate Hills of Make It British, “particularly, with what we’re seeing in the pandemic, you’re not relying on stuff coming from the other side of the world.”

Briefly touching on her own experience in the industry, Kate mentions some of the many benefits to manufacturing locally: “There’s flexibility of having a local supply chain, the ease of communication.” While touting the benefits, Kate admits that it’s unrealistic to expect all the parts to be entirely sourced from the UK, her solution is simple for this though: “What we should do, instead of low quality high volume products, we should be aiming for high quality, low volume.” Investment in local sources for parts that make up your product could be the solution, Kate herself has done something similar and has seen brilliant results.

“It does all need investment though,” Kate summarises, telling the roundtable that in order to cut costs, you’re going to need to have the latest advancements in tech if you’re looking to produce locally.

With all the benefits of local manufacturing, it’s no wonder that many aim to support businesses in their decisions to look locally to producing their goods. Through support, encouragement and perhaps a slight nudge in the right direction for businesses considering alternate methods of manufacturing, it’s a desired goal to boost the industry, but is it achievable?

“Our message is support local when you can, it’s not for everything and sometimes it’s just not possible,” says Michael Oszmann of Buy Britain, stating a rather realistic approach to manufacturing.

Michael describes his own efforts in supporting British businesses and British manufacturing: “We’re trying to create a sort of community where every member brings a bit of extra weight,” he says, “whenever anyone joins our site, we immediately put them into something like Google Shopping which can be quite a technical and difficult thing to initially do.”

Michael’s effort to make it easier to get your product out there in a world of convoluted paid advertising is a drastically important but commonly overlooked component in manufacturing a stronger position for British manufacturers. Making the reality of a booming British manufacturing industry doesn’t just end at cost, rather the support provided where it’s needed.

“British manufacturing is a brand in itself,” says Nimisha Raja of Nim’s Fruit Crisps, discussing her own brand which previously had been manufacturing outside of the UK.

Mentioning how no one was doing what her business was doing, Nimisha tells of her outsourcing to Hungary: “It worked okay for a little bit, but the quality wasn’t there, the consistency wasn’t there,” says Nimisha. Realising that she needed to make a change, Nimisha made what she calls a “huge decision” and halted trading for a year and half to set up her very own manufacturing.

Nimisha describes British manufacturing as “respected around the world,” specifically when it comes to food. “It was more cost effective for me to do it myself than to have a whole supply chain involved where everything was contracted out.”

Undoubtedly the COVID-19 pandemic has had an impact on everyone, business is no exception. Unsurprisingly, there have been some drastic changes in manufacturing after such an unprecedented event.

“In the medical field particularly, it set a precedent for the amount of PPE we need,” says Radhika Srinvasan of Ecotextura, outlining to the roundtable that “a lot more needs to be checked thoroughly,” presently in the medical industry. With legislation and quality control now more important than ever, Radhika thinks the pandemic has taught manufacturers and suppliers “the quality of the supply chain.”

“Because of the pandemic we have just had to plan a bit better and have other options in place,” explains Radhika, clearly alluding to the importance of British based manufacturing when you can’t rely on outsourcing to provide the quality, or even the urgency needed when it comes to particularly pressing circumstances.

It might be ideal for businesses to manufacture locally in the long run, but is it ideal for the consumer? With such a stark difference in attitude to a variety of social issues and practices when it comes to businesses, it can be hard to keep track.

“That’s been one of our biggest challenges,” says Hazel Russel of The Wood Life Project, addressing the question of whether or not the consumer will pay out that bit extra for a local product. “We have tiny margins,” continues Hazel, explaining that the cost of her product, while considered high by some, is the cheapest they can get when it comes to British based manufacturing.

Telling the roundtable about her troubles competing with bigger manufacturers with cheaper materials overseas, Hazel elaborates that a necessary step for boosting British manufacturing is “educating people that it is better to have the British side to it.”

Though, Hazel thinks that it shouldn’t be a competition, “we shouldn’t have to compete on price, because it’s a different product, we’re supporting British, UK business.” Looking on the bright side however, overseas British manufactured products are heavily desired in some parts of the world, the positive reputation of UK manufacturing seemingly is more respected overseas than it is locally.

Though previously mentioned, it can’t be stressed enough the impact local manufacturing has on product quality. Being able to closely monitor production and more effectively communicate during the process can make a world of difference.

Helen Chapman of Bellybambino agrees with all the previous points made, specifically pinpointing on the importance of quality in her own business and the relation to that when it comes to British manufacturing: “With our products they’re all handmade,” she explains, “there’s a lot of hand painting, which we just can’t trust will be done to our quality if we get them anywhere else.”

Finalising her points, Helen mentions the consumer satisfaction she’s been getting from the fact her products are handmade, having experience with the effort needed to ensure a quality product, Helen says: “I need to be overseeing everything. For us it’s just the quality and consistency, we didn’t feel like we could get that done just by importing them from somewhere else.”

To ensure a healthy relationship between British manufacturing and your business, it’s clearly not just about realising the benefits yourself, but enabling them to be perceived by others in the long run. What may look like a loss in the short term, clearly can result in a lot of time, effort and money saved across a long period of time.

United in the UK

Considering the important points of the roundtable, Natasha Frangos, partner at haysmacintyre describes the essential attitude that’s needed to drive us towards change: “A key takeaway from this morning’s session is that it reiterated to me the importance of joining forces across the businesses that are manufacturing locally as joint effort produces a louder voice to help drive change in this important area. We spoke about the feeling of trust that ‘made in the UK’ conjures up in consumers and particularly in certain industries, such as health and food. However, for many of the businesses the drive was much more about making things locally to reduce their negative impact on the environment.”