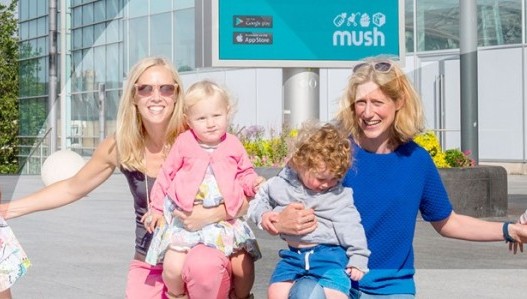 Looking after small children can be a lonely business. Katie Massie-Taylor was standing in a rainy playground in West London with a toddler and a young baby when she met Sarah Hesz. Their friendship not only helped her enjoy the difficult early weeks with a newborn, but led to a unique business opportunity.

Katie had previously been in the City, working as a derivatives broker and business development director. Sarah had worked in advertising. Both found themselves stripped of their corporate careers, immersed in the unending and capricious demands of small children.

It was a tough transition and they realised they had hit on a major problem. There had been a dearth of innovation helping new mothers to connect. Katie says: “There was NCT, but that was only available if you had £300 to spare and lived near a Waitrose.” As they forged their vital friendship in those tough early months, they realised not everyone was so lucky.

The consequences of this lack of connectivity were serious. Women without a network risked mental health issues: “When babies are small, there is no obvious place to go. Mums tend to stay in the house for long periods of the day and this social isolation is a key driver for poor mental health. It’s why many mothers suddenly feel floored. In this day and age, we live apart from our families, our job makes up a key part of our identity and we often don’t know the ‘weekday life’ of our neighbourhoods. The change to becoming a full-time new mum is all-consuming” Katie says.

“While social media should be a solution, she adds, it often ends up making things worse. New mothers compare themselves to other people who appear to be having a fantastic life and coping brilliantly, while they feel like they’re struggling.”

Katie and Sarah put their heads together to work out what they could do about the lack of provision for new mothers. Mush started as a way to find local mum friends – essentially a dating app for mums. Katie says:

“The app allowed you to message friends locally and then meet up. Everything we’ve done since has built on that offering, providing online support, content, meet-ups and other tools that mums need to feel happy, confident and connected.”

Building the app itself was surprisingly easy: there were plenty of people with the relevant technology expertise. Plus, it was an easy concept to create, other technologies existed already- they were patching them together. It didn’t come cheap, however: “We managed to raise £250,000 from a blend of angels, private investors and the VC Mustard Seed Impact.”

Nevertheless, those early years were eye-opening. While Katie said it never felt like work, they were constantly busy, flying around London to investor meetings, developing the product, building relationships, at the same time as trying to get ahead on what mums wanted as well as what would satisfy the next set of investors. “We were ruthlessly efficient in the early days to juggle it all without a team.”

They were working out of a coffee shop but began to get real traction. Even though it had its fair share of bugs and could do with improvement, they soon had an army of supporters behind their cause to bring mums together, who could help with the early marketing efforts. Katie and Sarah armed them with flyers, stickers, balloons and suggested a range of activities they could do to help connect people in their area.

The group had a successful Crowdcube raise of £1 million in December 2016 and began to look at Facebook advertising to attract users. More and more people signed up and to date the app has facilitated 2.5 million friendships.

What’s next for the pair?

They now have hundreds of thousands of users across the UK and Australia and financial backing from Octopus Ventures. They have an exciting partnership with the NHS that will lead midwives, health visitors and GPs to recommend Mush to mums in their care. Katie says that for the time being, they are working on doing an even better job of handholding a mum through the first year of motherhood and beyond.

“Having built a product mums love, we are now in a position to offer premium services around advice and confidence, as well as making money from brand partnerships. 2020 is all about making Mush profitable. The investment world has become more cautious. It is no longer enough to build a huge, engaged network and keep pushing monetisation back. Investors want to see profitability.”

Most importantly, Katie says, they will continue to listen to what mums need: “Motherhood opened a brand new set of problems I was desperate to solve, and gave me a renewed drive to do something that ‘counts’.” Mush has helped build connections at a crucial time in women’s lives.