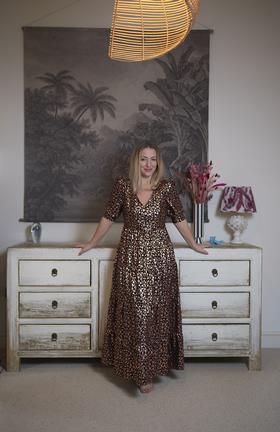 Jo Tutchener-Sharp, founder and CEO of Scamp & Dude has a long history in the world of fashion and beauty. Prior to founding Scamp & Dude, Jo was founder and CEO of Beauty Seen (now known as Seen Group). Jo has directed PR campaigns and arranged events for high profile individuals and brands such as Tom Ford, Matthew Williamson, Dolce & Gabbana, Vogue, Estee Lauder, Topshop, NARS and The BRIT Awards.

In October 2015 Jo’s life took a difficult turn when she suffered a brain haemorrhage. She had to leave her children for a lengthy stay in hospital to undergo life threatening brain surgery and it was this moment that inspired Jo to create a brand that helps children feel more secure when apart from their loved ones, and Scamp & Dude was born.

Famous for its superpower infused leopard and lightning bolt loungewear and vibrant designs, Scamp & Dude is a British purpose led fashion brand with a huge heart.

Although Scamp & Dude started off life as a kid’s brand, the womenswear division has seen unprecedented growth and now makes up 80% of the collection and has been worn by the likes of Liv Tyler, Fearne Cotton, Robbie Williams, Billie Piper and Laura Whitmore and is also stocked in Liberty.

Infused with kindness and superpowers, Scamp & Dude is much more than just a fashion brand; for each Superhero Sleep Buddy sold, another is donated to a child who has lost a parent or is seriously ill themselves. Likewise, for the Super Scarves (fronted by Billie Piper), for every scarf sold, another is donated to a woman with cancer or a mother of a child with cancer. So far Scamp & Dude has donated over 3,700 Superhero Sleep Buddies, 3,000 Super Scarves and over £450,000 worth of superpower infused sweatshirts to people having a really hard time. The brands slogan ‘a Superhero has my back’ tells kids that someone is watching over them and the ‘Superpower Button’ features on each garment to give the wearer a burst of superpowers.

Jo has spoken on panels for many brands including: Instagram, Facebook, Marie Claire, Red Magazine, Soho House and trade show Top Drawer and has been interviewed by The BBC,,The Times, Glamour, Liberty, Fashion United, The Independent, The Express Magazine, Stella, Red magazine, The Telegraph and Drapers.

Not only her own brand guardian, Jo has also become a spokesperson for other independent brands when it comes to IP protection having found herself in legal disputes with larger named retailers surrounding infringements of her IP and trademarked slogan, with the BBC recently interviewing her on the subject.

Jo lives in Berkshire with her husband Rob and two sons Sonny (9) and Jude (7).