Where no baker has gone before: Paul Baker dreams BIG

St Pierre Groupe’s Paul Baker is a Food & Drink Hero. Here we learn more about how he became an export champion and plans to ”boldly go where no bakery business has gone before”.

A man, a brioche-filled car, and a spontaneous drive down a freeway were all it took to inspire Paul Baker’s dream of having his own billboard in America. Today, St. Pierre’s exports 150 products into more than 35,000 stores worldwide and is setting up to hit £150m turnover by 2022. Eight years later from that freeway drive, St.Pierre’s has a billboard in sunny California proving that Paul Baker, founder of St. Pierre Groupe, knows how to turn a dream into a reality. His advice: “BE BOLD” 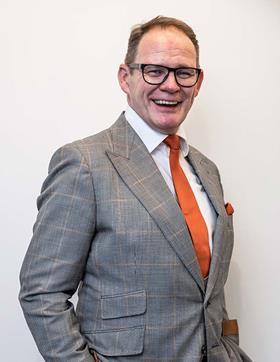 St. Pierre Groupe Ltd is an international bakery that operates in the UK, USA, and other countries. The company’s founder, Paul Baker, comes from a generation of bakers and got stuck when he was just 6 years old. Paul says it was these fundamental years of growing up in a bakery that helped steer him to his career. “My mother grew up in a bakery, my dad and my granddad were all bakers.” Paul worked alongside his father for several years and even trained as a craft baker in college. Paul went on to graduate with a BSc in Food Science before joining St.Pierre Groupe Ltd in 2003.

With Baker as a last name, some may say Paul’s destiny was written in the stars, however, he didn’t always want to follow in his father’s footsteps. Paul first started another business, separate from baking. Unfortunately, the business failed but not all was lost. Paul then went on to train as a Master Baker, worked alongside Michelin-starred contemporaries, and was elected as president of the Student Guild of Bakers.

“I genuinely think it was meant to be. I’m a Baker by name and by virtue”

The company is made up of three different brands:

St Pierre is the number one brioche brand in America and growing 46% year on year globally. People are still looking for reliable, comfort food amidst the uncertainty of the current situation. What’s more, whilst people are unable to go out to restaurants, our products offer a simple but effective way to recreate restaurant quality at home. St Pierre is premium bakery products that are accessible to everyone.

Baker Street is an extended life bakery brand. Its quality, classic bread products cleverly packed to stay fresher for longer. The UK and the pandemic have meant the USP of the product (the extended life) is suddenly even more attractive as people are reducing the frequency of shopping trips.

Banking in on celeb giant and Great British Bake-off royalty Paul Hollywood, St.Pierre has partnered with the king of bread himself to bring out his part-baked bread range. Shelf-stable products have come into their own so that’s also benefitted this range. The added appeal with that brand though, is that it provides that classic comfort – of fresh-baked bread at home – without anyone needing to be a dedicated baker.

A fall from grace

With bread flying off the shelves and a list of accolades including an award from event partner Food and Drinks Heroes, it may appear as though St.Pierre has never failed right?

Well, it hasn’t always been smooth sailing for the bread empire. In 2008 catastrophe struck when the company was challenged by a financial crash.

”The crash of 2008 nearly killed the business and I spearheaded our growth in export in a bid to protect us from future seismic shocks.”

It worked and the business was back and booming.

In 2014 St.Pierre launched in America. 5 years later not only did the business win the prestigious Queen’s Award for Industry in International Trade, but Paul won the Insider’s award for International Ambassador. It was an outstanding year for the company, especially because covid-19 wasn’t around to slow things down,  ”It goes without saying really that the pandemic puts stress on everybody, everywhere, not least the food industry. Bakery is one of those areas that consumers have retreated to. For various reasons, our brands have done very well during the pandemic. I think the biggest challenges were probably trying to manage the peaks in demand.” said Paul.

”For various reasons our brands have done very well during the pandemic. I think the biggest challenges were probably trying to manage the peaks in demand.”

Paul recognises that managing products across all geographies was a “gargantuan effort”, but thanks his fantastic team who rose to that and were able to keep their customers supplied around the world.

St.Pierre has more than doubled their headcount. Now, the company is set to appear in the Sunday Times International Track 200 for the fifth time running.” It’s an exciting time for bakery. The way people eat, the times they eat and the sense of occasion around each meal time has changed this year. Most of us are very habitual in our choices, with an ‘at home’ menu that we recycle based on the day, the season and the guests around our tables.”

Covid has changed that, because it altered so many people’s circumstances. It’s driven a huge shift in needs and behaviours when it comes to food, says Paul. The opportunity for food companies is huge, but for the bakery sector, in particular, it’s phenomenal.

It is a great oppertunity to bring excitment to back into lunchtime, ”Weekday lunches has long-been a low-value, low-interest event – but there’s an opportunity for bakery to do something different” Paul says. Consumers are receptive to change more than ever and St. Pierre has an audience who are actively seeking out new flavour experiences from the comfort of their home.

For the foreseeable future, Paul and his team plan to be busy working to meet changing consumer demands. Paul credits his success partly to the company’s brand value. “Part of what sets us apart from competitors is the fact that we are driving growth through our branded proposition,” he says. “In an age where supermarkets and own-label has squeezed the middle market off shelves, we have established brands that are thriving.”