UK was the slowest growing economy in the EU in 2017 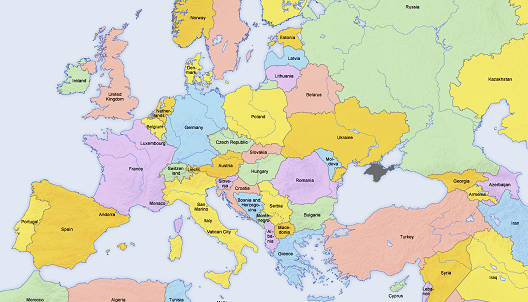 The data is in, for UK plc, it is by no means a disaster, the figures are not awful – but it is clear, amongst all the EU countries for which we have data, the UK was the slowest growing economy in the EU last year.

In fairness, it should be pointed out that there are a number of countries for which we do not yet have data, but with one exception, they all put in a much stronger performance than the UK in the first three quarters. The only EU economy that may have had a had worse 2017 than the UK is Denmark, its annual growth rate in Q3 was 1.5 per cent, against 1.7 per cent in the UK at that point.

It should also be pointed out, that the UK performance was not appalling - its economy grew by 1.5 per cent – lacklustre for sure, but a long way from recession. Furthermore, the year saw a steady improvement, the worst two quarters occurred in the first half of the year, the best quarter, when the UK grew by 0.5 per cent, occurred in the last three months.Even so, given that 2017 represented a year of pick-up for much of the world, the UK stands out as being one of the few countries to see a deterioration – and it should not be like that, the global recovery should have given the UK a nice boost. 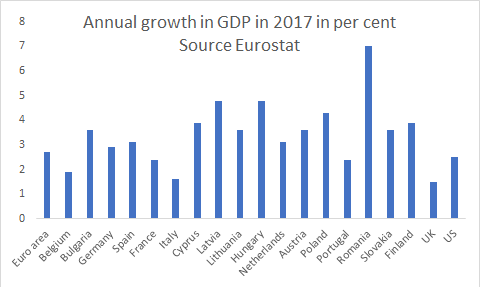 Even more concerning, the latest purchasing managers indexes covering January pointed to an economy that saw its weakest performance in some time, the indexes pointed to a sharp slowdown in growth to around 0.3 per cent.

At the same time, the latest purchasing managers indexes tracking the euro area and US pointed to an improvement in January. Another closely watched index, the Germany Ifo, suggested that the German economy is in for a highly successful 2018.

Working out why 2017 was a disappointing year for UK plc is not rocket science, post-Brexit vote falls in sterling led to rising prices and falls in wages after inflation. At the same time, investment growth was disappointing too.

Inflation is expected to fall back in 2018, as the effects of the fall in the pound seen in 2016 work their way out of the system.

Looking at the German economy, Jennifer McKeown, Chief European Economist at Capital Economics said: “Looking ahead, the German surveys bode very well for the start of 2018, with the Composite PMI pointing to a pick-up in the quarterly pace of growth to about 0.7 per cent and the Ifo telling an even more positive story. Political uncertainty since September’s election appears not to have damaged business or consumer sentiment. And assuming that a Grand Coalition Government is finally in place from next month, consumer spending growth should receive some support from fiscal measures to help families later this year. In all, we continue to expect German GDP to rise by 2.7 per cent in 2018 and 2.0 per cent in 2019. But with inflation confirmed at 1.4 per cent for January and aggregate wage growth subdued, Germany’s strength is not yet generating enough inflationary pressure to cause the ECB to alter its dovish stance.”

Jacob Deppe, Head of Trading at online trading platform, Infinox, said: “Given 2017 saw the best economic growth in the Eurozone since before the Global Financial Crisis, much will be expected of this year. With both the US and Eurozone growing in tandem and with Asian economies on a roll, the hope is that 2018 delivers greater confidence and economic stability for the first time in a decade. Growth should in theory gain momentum in 2018. That will hopefully mean inflation finally picks up alongside improved job creation, the two things that are currently holding the Eurozone back.”