UK growth picks up a treat: but a re-balancing act is set to follow 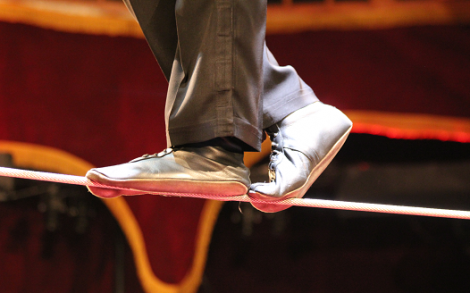 Data out yesterday revealed a good end to 2017 for the UK, but the economy has a challenge ahead. How well can it grapple with it?The ONS, as it so often does, has changed its mind. It did estimate UK growth in GDP at the end of last year at 0.6 per cent, but its statisticians, after dusting off their abacuses and slide rules (there are brownie points if, unlike the late soul singer Sam Cooke, you know what a slide rule is for) the ONS found that actually the UK economy grew by 0.7 per cent at the end of 2017.

That was the joint fastest growth rate since 2014.

An odd thing has been creeping into a lot of economic data of late, it keeps surprising on the upside – and this has rather muddied the Brexit debate – but the odds are good that if the UK had voted to Remain, the economy would be growing just as fast, maybe even faster.

Actually, at this stage, after experiencing such a nasty downturn, as the UK did for many years after the 2008 crash, you would expect above average growth – but in fact, prior to 2008, 0.7 per cent quarter on quarter growth was not exceptional. By past standards, this recovery is weak.

But there is a bigger snag. 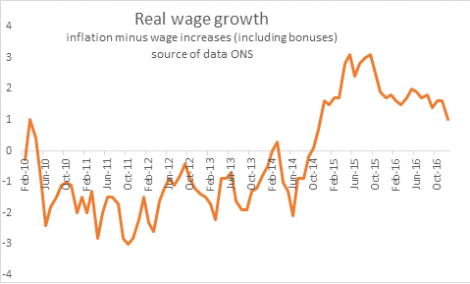 Inflation is rising, but wage increases seem to be slowing.

In December, inflation was 1.6 per cent. In the three months to December, wages rose at an annual rate of 2.6 per cent. More to the point, inflation is on an upwards trajectory, wage increases seem to have peaked in November.

Economists expect inflation to carry on rising, and to pass three per cent, or maybe go higher, later this year. There is more than one reason. Inflation is on the up across much of the world, it has been rising fast in the US, and Eurozone, while producer prices have surged in China. But the UK has the additional issue of a weaker pound – exacerbating the inflation challenge.

Meanwhile, surveys suggest that employers are in no hurry to increase wages.

It is surely only a matter of time before inflation rises faster than wages, meaning real wages start falling – and that won’t be good for the consumer related areas of the economy.

But it was precisely these areas that supported the economy in Q4 of last year, consumer spending jumped nicely, consumer related services did well too – indeed, the ONS cited these two areas as the main drivers of growth in the quarter.

But since then, we have had data to show that retail sales fell in January, the Halifax recorded a fall in house prices, Rightmove recorded the lowest rate of annual growth in house prices since 2013.

In short, consumer-led growth is slowing even before real wages start to fall. What will happen in a few months’ time when real wages are falling?

But, in the GDP race, can the consumer successfully hand the baton over to manufacturing?

The surveys, the data and the apparent course of inflation suggests that some kind of handover is occurring, but there is a question mark over how smooth it will be.

The latest purchasing managers indexes were consistent with growth of 0.5 per cent, the odds are high that as the UK re-balances, there will be slow down in growth, but maybe nothing too drastic.