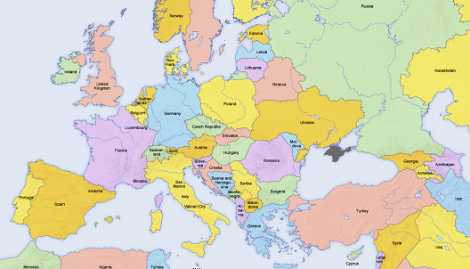 It may come as a surprise to you, some may even feel the need to pinch themselves, but the data says what the data says, and euro economy is booming – apparently.We have come used to hearing about the sorry tale of the euro area, some even suggested that the single biggest reason for the UK to leave the EU was so that Britain could get out and leave the sinking ship before it dragged us all down with it.

But that’s not the story of the data. 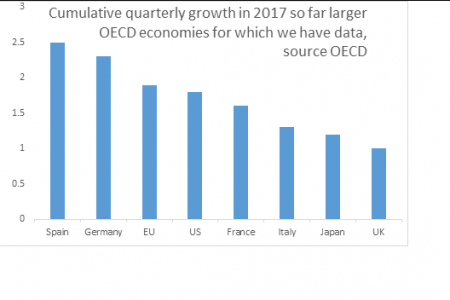 But now we have a feel for what has been happening since, and in November the euro area seems to have seen something spectacular.

We won’t have official data for Q4 until next year, but we do have the next best thing covering October and November, namely the purchasing managers indexes (PMIs).

And in November, the PMI tracking manufacturing in Austria and The Netherlands rose to an all-time-high. The manufacturing PMI for Ireland rose to a 129-month high, in France it rose to an 84-month high, and in both Germany and Italy the index stood at an 81-month high. The highest reading for the index (62.5) went to Germany, such a reading may be at a mere seven year or so high, but historically the index for Germany has often performed well 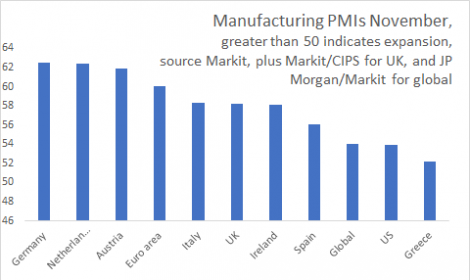 So much for manufacturing. The PMIs point to boom in this sector, but what about the rest of the economy?

On Tuesday (5th December), we got the PMIs covering services and then the composite PMIs.

The services PMI tracking the euro area rose to a six-month high, but drill down and things look better. The backlog of work rose at the quickest pace since 2011, suggesting that December will be a busy month as companies try and catch-up, and employment creation saw its biggest rise in ten years – just to be clear, that’s ten years.

As for the composite, the picture looks like this:

And what does this mean?

IHS Markit, which compiles the figures says that overall, PMIs are consistent with growth of 0.8 per cent in Q4, with Germany growing by 0.9 per cent.

These are impressive figures.

Meanwhile, we have had data on Greece. It grew by 0.3 per cent in Q3, and in the first 10 months of the year posted a modest budget surplus – although its primary budget – that’s before interest on debt – was over five per cent of GDP.

There is no guarantee this will last, but right now, the euro area is booming, and is doing so in a way that we have not seen before this decade.

The UK, by contrast, err hum, alas the latest composite PMI points to growth of 4.5 per cent in Q4.