Sterling rollercoaster day as the hawks swoop in on central banks 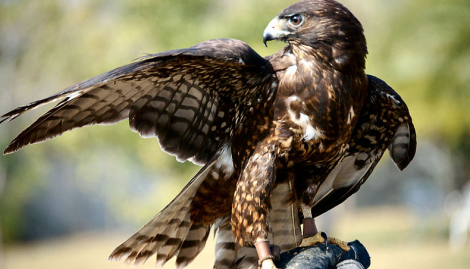 Currency markets were all over the place yesterday, as sterling fell and rose, and central bankers started making noises that sounded an awful lot like the screech of a hawk.

Doves coo and hawks screech. Doves make lovey, dovey noises, there is something a bit scary about the noise a hawk makes.

In the world of economics, a dove is an economist that wants low interest rates, or indeed lower rates. A hawk wants them to go up. And the last decade has seen the doves in control. But there are signs it is changing, a bird of prey seems to be returning to the Bank of England, and maybe the European Central Bank, too.

The first hint that there were hawks about, came earlier this month when the Bank of England’s Monetary Policy Committee – MPC – which is responsible for setting interest rates, and indeed was responsible for quantitative easing, met. The eight men and women who make up the committee, sat and debated, and the ladies and the gentleman of the press had a bit of a snooze, they weren’t expecting much, surprises from the MPC are about as rare of sightings of a rare bird of prey in the City of London.

It is just that when the MPC did finally release the minutes of the meeting, it turned out that three members voted for a hike in rates, that was a score of 5:3.

Now that came as shock, and the press started to wake up.

Then Andrew Haldane, the Bank of England’s chief economist, a man who has been so busy making cooing sounds, that is a wonder he has not moved into a dovecote, suggested that the time was coming when it could be appropriate for interest rates to go up. The press sat up, the sleep well and truly removed from their eyes.

Even so Mark Carney, the governor, the man who has the deciding vote in the event of an impasse, is even more dovelike. And then yesterday he only went along and said: “Some removal of monetary stimulus is likely to become necessary if the trade-off facing the [Monetary Policy Committee] continues to lessen and the policy decision accordingly becomes more conventional”.

There, said it. A dove only needs to lose focus for a short while and it’s a hawk’s dinner. Well, Mr Carney has made something of a meal about keeping rates low, now he seems to be ready to switch tack, and that has left the currency markets ravenous for pounds.

Sterling leapt yesterday, at one point there were just under 1.13 euros to the pound, a few hours later there were near 1.14.

But hold on a second. The story gets a little confused at this point. Because 24 hours earlier the pound euro exchange rate was not that different from the price at the time of writing.

Mario Draghi, top man at the European Central Bank also spoke yesterday. And he muddied the water, saying that he thought that the risk to growth in the euro area were now broadly balanced rather than tilted to the downside. And with that markets concluded that the ECB had gone hawkish, and they bought euros, which explains why sterling fell during the first hours of yesterday. But then, later in the day, an ECB spokesman said that Mr Draghi’s remarks had been misinterpreted by the markets, which is why the euro then fell back.

But what we can say for sure is that there is a mood shift – the hawks are moving into the ascendance at the Bank of England, as has been the case in the US for some time.

Interest rates in the UK may not be going up very soon – the MPC next meets up in August. But the odds of a rate hike in the next few months are rising.

Of course, actually, whether UK interest rates are 0.25 or 0.5 per cent makes very little difference to the world – maybe we can over egg these things.

It is not really the case that the Bank of England is becoming hawkish, it is just that dovecote does not emit quite so many cooing sounds, these days.