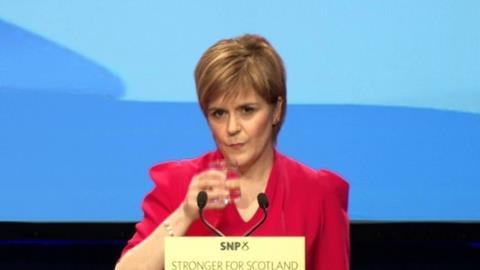 The Scottish government has asked the UK government to clarify the extent of the extension to the furlough scheme.

Prime Minister Boris Johnson revealed that the furlough scheme would be extended “until December” as he announced a month-long lockdown for England. It had been due to expire just a few hours after his press conference but will continue to pay 80% of wages for employees unable to work through England’s second lockdown.

Scotland’s First Minister Nicola Sturgeon has asked the UK government to confirm if the scheme would be available for Scotland, should it need to enter another national lockdown at a later date. It was a position supported by Scottish Conservative leader Douglas Ross.

It comes after Chancellor Rishi Sunak rejected a request from Wales’ First Minister Mark Drakeford to extend the furlough scheme for its own national lockdown which started on 23 October and will end on 9 November.

Ms Sturgeon said the tougher measures introduced at the end of September are having a positive impact.

However, she also said: “We are monitoring the spread of the virus in all parts of Scotland on a daily basis to assess if, to what extent and at what speed the slowdown is continuing. We will not hesitate to increase the level of protection either locally or nationally if required.”

“A crucial point for us is whether support on the scale announced for English businesses is available for Scottish businesses now or if we needed to impose further restrictions later - or if it is only available if Scotland has a full lockdown at the same time as a lockdown in England,” she said.

Today, Scotland begins life under a new five-tier system of restrictions, making it more wide-ranging than the system used in England by the UK government. However, none of Scotland’s 32 local authorities have been placed higher than tier 3.

Mr Sturgeon said: “It’s crucial that everyone knows what level their local authority is in and that they stick to the rules in their area.

“The postcode tracker will be a vital tool in helping to ensure this happens.”

The First Minister stressed that while Scotland was in a better position than much of the rest of the UK, there is no room for complacency.

She added: “No one wants to see tighter restrictions but people can be reassured that, if we need to put in place the protections that come with higher levels, we will not hesitate to do so.

“I also urge everyone to follow two key national restrictions by not mixing with other households inside our homes, and not travelling to or from any part of the country in level 3 unless it is absolutely essential.”