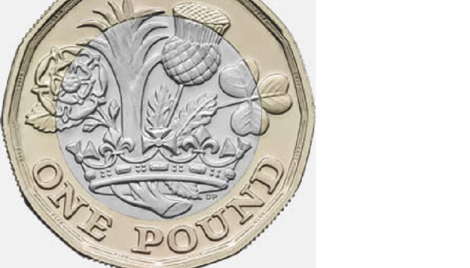 The pound fell to a new eight-year low against the euro, expect a knock-on effect on real wages next year.

UK inflation is hardly off the charts.

At 2.6 per cent in July, it was ever so slightly above the Bank of England's two per cent target. In a different era people would barely blink at that. It is just that wages are rising much more slowly, up 2.1 per cent in the latest period for which we have data. Real wages are falling and that is hitting households, hitting retail and is all round a pretty bad thing.

There is another point, after inflation rose earlier in the year in US and euro zone, it is much lower, 1.3 per cent in the euro area, for example.

There is no mystery behind the discrepancy, UK inflation is higher because sterling fell sharply after the Brexit vote.

But after a few months, the pound started to reverse some of those falls - and by the end of last year, while it was lower against the dollar and euro than it was pre-Brexit, the falls were not so bad. There were roughly 1.29 euros to the pound before the vote, around 1.19 by the year's end. And that is why the inflation effect of the falling pound has not been that serious.

It all changed when Theresa May chose to call that election. Once the votes were counted, and parliament started to take on a hangdog expression, sterling started to fall again.

Then, when the Brexit Secretary David Davis started making noises about 'constructive ambiguity' and negotiations went as smoothly as a German frankfurter sausage in a top French restaurant, the pound fell again, at least against the euro.

It has been more stable against the dollar, but you can thank President Trump for that. Against the euro, it dropped to a new eight-year low, less than 1.09 euros to the pound at one point.

According to Paresh Davdra, CEO and Co-Founder of RationalFX, "Sterling’s latest stumble against the euro has once again raised analyst speculation of parity with the euro for the first time in the shared currency’s history. This week’s slow progress in Brexit negotiations, with talks seemingly at an impasse over the UK’s exit bill, has weighed down a pound already under pressure from poor data."

He did say, however, that with "ambiguity over Brexit negotiations acting as the key pressure on the pound, there is the chance that once more clarity is established, the currency will be able to rise against the euro again. Investors will be watching the progress of talks closely to look for the chance of relief for the pound.”

But, if things stay as they are, expect another hike in UK inflation next year - there are usually time lags between major currency movements and a corresponding change in inflation. This means that real wages are likely to carry on falling for some time, unless that is, Mr Davis and co can surprise us all with some kind of negotiation coup, lifting the pound.