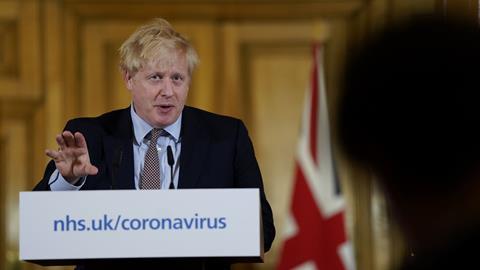 PM: Furlough available for all lockdowns

The furlough scheme will be available in Scotland if it enters a national lockdown in the future, Boris Johnson has confirmed.

Speaking to Parliament, Mr Johnson said the scheme would “continue to be available wherever it is needed”.

The Prime Minister announced that the scheme would be extended as part of England’s second national lockdown, which runs from 5 November to 2 December.

It led to calls from Scotland’s First Minister Nicola Sturgeon for the UK government to clarify if the support would be available in devolved national lockdowns. It also followed a recent dispute with the Welsh government, which requested the scheme be extended beyond 31 October to cover its own ‘fire-break’ lockdown from 23 October to 9 November, but was rejected by Chancellor Rishi Sunak.

The Prime Minister said: “The furlough scheme is a UK-wide scheme. If other parts of the UK decide to go into measures which require the furlough scheme then it is, of course, available to them. That has to be the right and that applies not just now but of course in the future as well.”

However, there was confusion this morning as housing and communities secretary Robert Jenrick told Sky News that the furlough scheme would be available until the English lockdown ends on 2 December, and any future use of the scheme would be ‘up to the Chancellor’.

Ms Sturgeon had said that any plans for a lockdown across Scotland may depend on the level of financial support available to people.

The First Minister said she welcomed the news, but wanted “urgent confirmation from the Treasury that it will be exactly as we asked for”.

Scotland began life under a new five-tier system of restrictions on Monday, with none of its 32 local authorities being placed in the two highest tiers. However, the Scottish government has warned that a national lockdown may be needed in the near future.

Ms Sturgeon said there were “encouraging signs” that tighter restrictions imposed since September were having a positive impact and wanted to assess the effect of the new tier system before introducing a new lockdown.

She said: “I made clear last week that we might yet have to go further and we can’t rule out a move to level four for all parts of the country.

“While that decision would never be easy, there is no doubt that the availability of a more extensive furlough scheme would make it slightly less difficult, because workers would have more of their wages paid.

“The decision we have to weigh up is should we take the opportunity of more generous financial support to step harder on the brakes now, to drive down infections.”

She added: “It cannot be right that the only time that additional financial support is made available is when the south of England needs to go into a lockdown. That just isn’t fair given the situation we are dealing with.”