Markets panic over a rumour: is this another banking crisis? 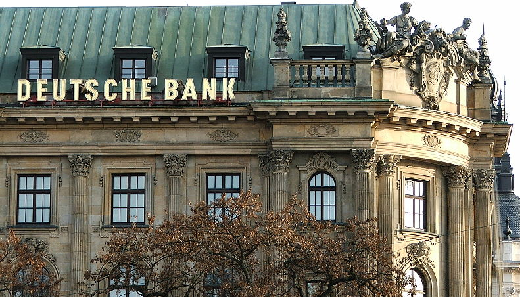 Deutsche Bank is important, if it went bust then the fallout would be such that other banks may fall in turn too, like dominos. Some say that if this happened it would be like a re-run of the 2008 crisis, when Lehman Brothers went bust. Yesterday saw a major sell-off across the markets on fears that is precisely what may happen.

Back in June, when the IMF said that Deutsche Banks was the riskiest globally significant bank, onlookers were more than a little worried. But then, the IMF also expressed fears about Credit Suisse and HSBC. It was not suggesting the banks were risky in the sense that they were in danger of failing any time soon, rather that because of the way they were linked to the international banking system, if they failed, the impact on the international banking system would be especially acute.

The German bank, which was once seen as metaphor for all that was strong about the German economy, has had a torrid few years – it’s an investment bank, not for this bank the safety net of retail banking, unlike HSBC it does not have less risky banking activities to fall back on.

As if this wasn’t bad enough, its share price has fallen, while other banks saw recovery, a catalogue of woes has hit the bank, from LIBOR related fines, to ongoing fallout from subprime mortgages.

But then US authorities came along and said that they were fining the bank $14 billion for misdeeds related to the subprime period of the noughties. Considering that these days the bank is only worth around $18 billion – after the steady and sometimes sharp falls in its share price in recent years – that seems like rather a lot of money that it has to find.

So might a $14 billion fine sink the bank, and might this create a nasty form of international contagion? The answer to these questions are in order, quite possibly and maybe.

Hope, for the bank comes in the form of anticipated negotiation with US regulators, and the belief that the bank can get the fine down, way down – maybe to $5 billion or less.

But what if it can’t? Not only might that sink the bank, but the international banking system may stutter, and who knows, maybe sink too.

Now the German media have been suggesting that Angela Merkel is not willing to rescue the bank in the event it goes bust. She can’t really. After-all, Mrs Merkel has been a big critic of banks, and the rescue programme of 2008 and 2009. In Germany, there is this sense that investment banking does not create real wealth – it is not an uncommon view across the world, it is just especially pronounced in Germany.

Of course, many people feel the banking bailout of 2008/09 was a huge mistake. They say this is the very reason why the global economy has been so weak since.

Maybe, but the lesson of the 1930s is that when banks fail the result can be a massive contraction in the money supply that can trigger off a depression, and who knows, maybe the last Great Depression helped create the conditions, or at least exacerbated the conditions, that led to World War 2.

Investment banks may, or may not be useful members of society, but they are clearly systemically important, and while some say the last banking bailout is the cause of all the woes since, others say that the failure to rescue Lehman Brothers in 2008 was the real cause.

So, what’s the worst case scenario? This may unravel if Deutsche goes bust, at the same time that the burgeoning debt crisis in China leads to some kind of a crash. That would be nasty.

On the other hand, banks are much better capitalised now than they were in 2008, and although global debt has soared in recent years, it is only going to become a major problem across most of the world if interest rates go up. And, interest rates will only go up if economies start to improve.

Yesterday (26 September) markets fell, but the fall was not that cataclysmic. The FTSE 100 lost 91 points, high, but not excessively so. Sure the German stock markets suffered – the DAX saw steep falls – but right now, as these words are being written (5.30am BST), there is a sense of relief among the markets that Hilary Clinton handled herself well in the presidential debate against Donald Trump – and what happens in forthcoming elections – in the US later this year, and France and Germany in 2017 – may be systemically more important that the troubles of a once mighty bank.