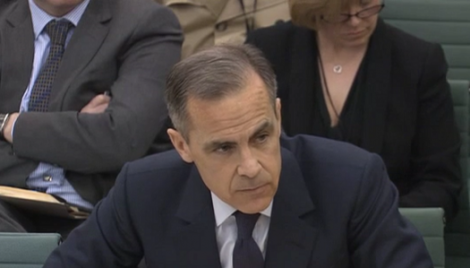 Bank of England governor, Mark Carney has come out fighting, telling MPs that they are putting too much emphasis on him and not enough on themselves.

Mrs May, even caught him in the monetary shower called QE, but he said; “it wasn’t me.”

Or to put it another way: “While monetary policy – with super-low interest rates and quantitative easing – provided the necessary emergency medicine after the financial crash, we have to acknowledge there have been some bad side effects,” said Theresa May, speaking at the Conservative party conference back in October. She added: “People with assets have got richer. People without them have suffered. People with mortgages have found their debts cheaper. People with savings have found themselves poorer.”

But speaking to a Parliamentary hearing, Mr Carney said: “The focus on monetary policy is a massive deflection exercise. It’s very important to distinguish the stance of monetary policy and the reasons why global interest rates are low . . . inequality is caused by much more fundamental factors.”

But what about house prices. They are going up because of low-interest rates, exacerbating the gap between the haves and the have-nots. Surely, when it comes to the property market, Mr Carney was caught red handed. Mr Carney said: “House prices in the UK are high because there’s no supply. . . The more we avoid this point, the more we pretend that the ills are the consequence of monetary policy. That’s why I said earlier, this is a massive blame deflection exercise. We’re going to do what we have to do given the suite of all the other policies in place.”

That’s central bank speak for: “It wasn’t me.

As for the argument that won’t go away, that QE has distorted the economy, creating zombie companies, even zombie government policy: Mr ‘it wasn’t me’ Carney said: “What I do not accept, there is a line of thought that is that central banks should not focus on their remit, they should tighten policy in order to force governments to take tough decisions. . . that is political.”

Meanwhile, in the US, during the run-up to the presidential election, the man we now call President Elect Trump, said: “We are in a big, fat, ugly bubble. And we better be awfully careful. And we have a Fed that's doing political things. This Janet Yellen of the Fed. The Fed is doing political…by keeping the interest rates at this level. And believe me: the day Obama goes off and leaves, and goes out to the golf course for the rest of his life to play golf, when they raise interest rates, you're going to see some very bad things happen, because the Fed is not doing their job. The Fed is being more political than Secretary Clinton.”

Ms Yellen may well reply by saying: “It wasn’t me.”