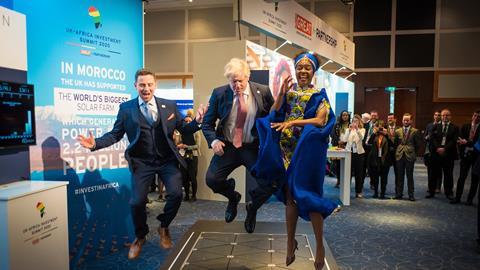 Laurence Kemball-Cook was more motivated than most. From breaking into a construction site to prove his business plan, he now spearheads a sustainable solution that turns your footsteps into electricity. Laurence tells us all about how no one believed in him and his now worldwide business.

Not a single person believed in Laurence Kemball-Cook’s idea when he started. It took 5 years for him to build his business plan out and now Pavegen is powering projects in 36 countries worldwide. Without any outside help, his smart and sustainable way to generate power through footsteps is now a well-funded and well-proven, even going as far as to be installed in a crossing near the Whitehouse. Pavegen doesn’t seem to be stopping its strides anytime soon and neither does Laurence, the eldest of 3 siblings and directly related to two talented engineers.

Laurence was awarded Eco Entrepreneur of the Year, now known as the Entrepreneur for Good & Sustainability award at the Great British Entrepreneur Awards (GBEA) two consecutive years in a row in 2015 and 2016. A few years on, Laurence is now speaking at GBEA’s finalist announcement workshop where we get an interesting glimpse into his powerful start-up story alongside Simon Cureton, CEO of Funding Options. Simon supports business owners connecting them to the right funding so they can trade, plan and grow with confidence.

This year all finalists were announced in a collection of category-based workshops that were all presented in partnership with Funding Options. Every big reveal was accompanied with an up to 20-minute Q&A session with some extremely talented previous GBEA winners right before the reveal of the shortlisted finalists.

Being environmentally conscious is more important than ever, and not just because of the ever-increasing media coverage that we’ve seen in the past few years. According to climate.gov, the global temperature has increased by 0.18C every year since 1981, with every month in 2020 bar December being within the top 4 warmest periods for that month on record. Sea levels are rising icecaps are melting and we’re probably subjecting a few penguins to a summer vacation they never asked for with countries like China, the US and India producing a huge portion of the worlds co2 emissions.

It’s not all bad news; however, thanks to the pandemic, air pollution in the UK is at an all-time low with many other countries following suit. Even with the already gradual decrease in pollution in the UK and many other countries since 2015 there’s still plenty of work to be done, so as sad as it is, it we’re just going to have to bid those plastic straws a permanent farewell.

“No one believed in it, no one wanted to invest in it. No real support in the early days.“

Founded in 2009 Pavegen was a revolutionary yet unproven idea. If making a prototype of the product in his Brixton bedroom wasn’t hard enough, Laurence had searched far and wide for investors to no avail. Starting his idea in university, Laurence was met with a shocking amount of rejection. The British government’s technology advice line going as far to tell him “Forget it, it’ll never work.” Not letting the rejection stop him from powering forward, Laurence attributed the turning point to a specific, minor crime that he thinks brought Pavegen where it is today. “I broke into a building site in Southbank in London,” he says. Revealing he had illegally installed his product in said site so that when his unknowing victims of his reverse-burglary stepped across the paving, lights that had been hooked up to the invention would power-on.

After posting news of the event on his website, Laurence quickly gave up his life of crime when he was contacted by Westfield, asking him if he was responsible for the risky stunt and asking to buy his product. “They said how much, and I said £200,000 please!” exclaims Laurence. What was probably the greatest not-heist ever netted Laurence a cool 200 grand and it was only up from there.

Laurence’s contribution to sustainability doesn’t just stop at Pavegen, providing some great insights into how the world could change for the better and take climate change a bit more seriously. Laurence is a strong believer in the power of the consumer, but also the damage it could cause. “People are always going to go for what’s cheaper” he says, a comment on recyclable food bags being more expensive than polymer disposable ones.

Applying to a much wider range of products and giving some perspective on the mentality of the consumer. However, some people simply can’t afford the luxury of sustainability. “The government is the market maker here to make sustainable products affordable,” comments Laurence. Whoever you are we all love a bargain and well off or not we’d all find it a lot easier to be sustainable if the product prices were too.

Quoting writer and philosopher John Ruskin, “There is no wealth but life” Laurence believes that with the new generations of Gen Z’s and Millennials, sustainability will become a bigger part of everyone’s life as young leaders rise to power being brought up on the values both Laurence and Ruskin are promoting with their products and writings, disregarding the previous importance placed on materialism.

“I made so many connections by being in the room at the right time with the right people.”

Finally, Laurence tells us of the affect the GBEA award has had on him and his business, highlighting even further as many other applicants and award winners have already the value in connections and community. “I’ve still got some fantastic relationships from it today,” says Laurence, seeming just as excited as some of the other award winners that showed their enthusiasm for the GBEA community and the amazing friends and connections they made along the way.

In true GBEA fashion Laurence went on to further compliment the recognition his brand got from the awards, citing a litany of PR stories and coverage.

Present day, Pavegen is thriving. Spanning 36 countries, and having generated 8 million pounds in revenue. Pavegen has even got some attention from Boris Johnson and Transport Minister Grant Shapps after being presented by Laurence himself at a cabinet meeting in December 2020.

BORIS BOUNCE! Prime Minister @BorisJohnson jumping for joy with our CEO @laurencekcgram on the latest @Pavegen tiles⚡️We are excited to expand into the continent of Africa! #investinafrica @dfid_uk #borisbounce pic.twitter.com/dkpZOxXpW1

Having gotten over 500 million footsteps it’s looking like a bright future for Laurence and Pavegen so keep a look at your foot because the next step you take might just be boiling the kettle for you.

Watch the full interview below.