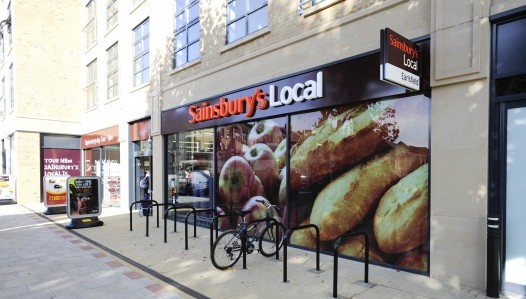 Falling food prices continued to have an impact on Sainsbury's, as the supermarket chain's annual underlying profits fell by nearly £100 million.

Sainsbury's posted an underlying profit, which removes one-off costs, of £587m in the year to mid-March, down from £681m in the previous year.

However, it returned to a pre-tax profit of £548m in the year, following a £72m loss the year before.

Speaking to the BBC, Sainsbury's chief executive, Mike Coupe, said: "Prices are actually 4% lower, would you believe, than two years ago and that's a reflection of the fact that the market is fiercely competitive - and it will remain so for the foreseeable future."

The UK's 'big four' supermarkets - Asda, Morrisons, Sainsbury's and Tesco - have all come under huge pressure from budget chains like Aldi and Lidl in recent years. They have been forced to cut prices to remain competitive.

Sainsbury's shares fell 2% after the results were published.

In April, the retailer agreed a £1.4 billion deal to buy Argos' owner Home Retail Group. Mr Coupe said it would provide "compelling" options for customers. He said the deal would offer customers a range of 50,000 products with a four-hour click-and-collect service.