Easing the pressure on the automotive industry with advanced manufacturing technology 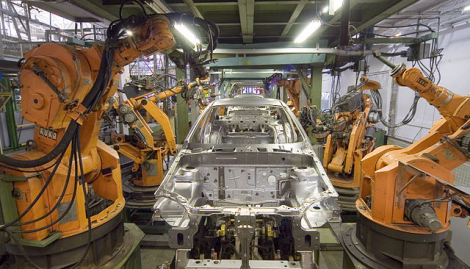 Businesses in the automotive manufacturing sector are currently facing a series of challenges; there’s a need for them to create a more flexible production environment, reduce engineering time and costs, and accelerate speed to market, says Stephen Dyson.

Under increasing pressure to meet customer demand for more personalised designs, there’s a need for them to create a more flexible production environment, reduce engineering time and costs, and accelerate speed to market in a bid to remain competitive.

Like other industries, automotive manufacturers are also experiencing a global skills shortage with too few engineers with qualifications necessary to operate sophisticated automated equipment and machinery, or support the advancements made possible through the use of emerging technologies.

However, while robots may be able to carry out an engineer’s tasks in some instances, they can’t be relied upon entirely on all but a few factory floors. And in those cases where robots or automated machines are being used, it still takes a skilled worker to oversee operations and provide the robots with instructions.

Even the much discussed Internet of Things (IoT) and machine-to-machine (M2M) interfaces aren’t predicted to fully replace the hands-on skills that an experienced engineer can offer.

A number of recent industry reports have highlighted a lack of qualified individuals possessing the skillset necessary for working in today’s technology-centric world.

The current demand for engineering outstrips supply, with the 2017 Engineering UK: The State of Engineering report, for example, indicating an annual shortfall of at least 20,000. The report also forecasts that 186,000 people with engineering skills will be required each year from now until 2024 in order to meet the country’s manufacturing needs. And it’s still too soon to predict what impact the UK’s decision to leave the European Union will have on the manufacturing industry’s requirements.

The situation is similar across the Atlantic too, with a report from Deloitte projecting that around 3.5 million roles will need to filled by 2025 in the US, and that 2 million of these may be affected by a lack of skilled workers.

Skills shortages are, of course, an issue that reaches far wider than just the automotive industry, but there are a number of reasons why this sector in particular is experiencing a lack of skilled workers.

Qualified engineers, for example, will often leave their area of expertise to follow what they consider to be a more lucrative career in a different field altogether, such as finance. Those who do remain true to their specialism, however, might pursue a path in an area other than automotive.

Then there’s the questions of perception.

As advancements around newer processes such as 3D printing continue to push the limits of conventional manufacturing, so smart factories are beginning to replace more traditional production facilities. Employees can, as a result, spend more time using a computer than they do hands-on with “traditional” manufacturing equipment.

It appears, however, that the public’s perception may not have advanced at the same pace with which the technology has evolved. A career in manufacturing is imagined by some as being the same as it was one or two generations ago; as a decent-paying job that involved long assembly lines, manual labour, and loud machinery. Indeed, according to a US study published in 2016, 71 percent of young people don’t see manufacturing as being a high-tech career option.

It’s important, therefore, that if we hope to close the skills gap and inspire people to pursue careers within the industry, we find ways to dispel such misconceptions and enlighten the next generation of employees as to what modern manufacturing really involves.

Keeping up with advancements

Businesses today need employees who are able to adapt to, or evolve with, ever changing technology.

Manufacturers, in the automotive sector and elsewhere, have recognised the importance of creating a workforce made up of intelligent problem solvers, and are becoming increasingly focused on hiring and training talent that will be able to keep up with advancements, as well as driving investments, in technology.

Should suitably qualified prospects be unavailable, however, then automated software could provide an alternative solution in certain instances. Technology-driven 3D printing, CNC machining, and injection moulding, for example, can all be employed by in-house engineers and designers to assist with product requirements.

They can even help reduce a project’s time to market, with digital manufacturing technologies offering speeds that meet – and often exceed – customer demands, with parts produced on-demand within a matter of days.

Although the automotive industry may be facing a number of challenges, digital manufacturing and technological advancements are enabling engineers to deliver products to customers at a speed never previously imagined. In doing so, they’re not only easing the competitive pressure on car manufacturers, but also helping to fill the void left by the current shortage of skilled engineers.