Dow Jones does it again – another record, does that mean the economy is set to break a record too? 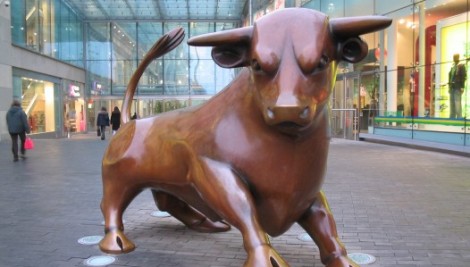 The Dow Jones Industrial Average, the index that tracks 30 of the largest listed companies in the US, has passed another milestone – this time breaking 22,000. It has been quite a time for the index, which seems to break records like Usain Bolt did in his heyday. But what does it really mean?

Cast your mind back to November 8th, 2016. Donald Trump has been elected as President of the United States. The Dow Jones was trading at just under 18,000. Now it has passed 22,000.

A certain former host of a US TV show called the Apprentice has not been shy in taking the credit.

Actually, the Dow was at less than 16,000 in January 2014, so the rises of the last nine months or so have been more like a continuation of a trend.

The Dow Industrial average is made up of just 30 companies – the likes of Apple and Goldman Sachs.

Some may say that when you think about the fact that just 30 companies make up this index, it is not so relevant. But then the S&P 500, which covers, surprisingly enough, 500 stocks, has also been doing pretty well of late.

But are such rises sustainable? And what do they tell us about the wider economy?

There is a view that share prices have been distorted by low-interest rates. When companies are valued, the formulae, that is supposed to be used, takes projected profits into the future, discounted by a rate of interest to give a net current value. The lower that rate of interest, the higher the valuations. Rates are exceptionally low, ergo, goes the argument, share prices are distorted by low rates, and when they return to normal levels, it will all end in tears.

But then when you drill down and look at the companies, a different narrative emerges.

Apple posted exceptionally good results in the latest quarter, that helped lift the index, but this jump has got more to do with the popularity of iPhones, iPads, and success enjoyed by the service division, than low rates.

Walt Disney is in the index too, shares have more than doubled over the last five years, but that has got more to do with the success of the Marvel and Star Wars franchise than low-interest rates.

Other members of the club include Microsoft – shares are up by about a half in the last year.

The list goes on, look at each company individually and you find a good reason for shares to have gone up – or in some cases down.

By the way, Alphabet/Google, Amazon and Facebook – the second, fourth and fifth largest companies in the world – are not listed on the index.

Sharp falls in the dollar have helped, and low rates have been a factor, but it does seem that solid fundamentals had a good deal to do with the surge in the index.

But what does it mean?

The fact that the Dow is soaring does not mean that the US economy is firing on all cylinders.

And that brings us to the problem. Studies show that US median wages have barely risen in decades, yet shares have seen an extraordinarily good run.

And maybe what happens to median wages is what really matters – and so the rise in the Dow is all very nice, and it is good for pension funds and investors, but as a guide to real street, it is not irrelevant, but maybe it almost is.