The number of deaths from Covid-19 has dropped to 638, the number of new tests available are growing exponentially but the German chancellor Angela Merkel has warned that we are still at the beginning of the Covid crisis.

Day to day infections rates vary, and weekends tend to distort figures, not because there are less infections or deaths at weekends, but because of delays in reporting or in issuing death certificates.

Over the last 24 hours, 638 deaths from Covid-19 have been reported. This is too high of course, and behind each death is a human story of tragedy. This does mean, however, that the daily death rate has fallen for three days in a row — unusual over a Tuesday to Thursday period. Maybe more significantly, the death rate this Thursday was lower than last Thursday and the Thursday before. 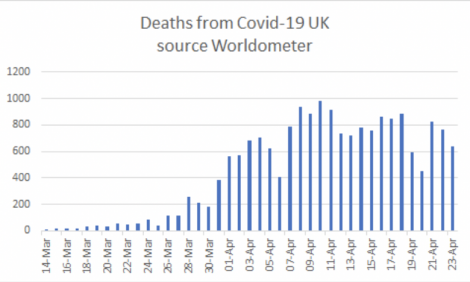 The current peak in the three-day average, which gives a better feel of the underlying rate, occurred on April 10th. 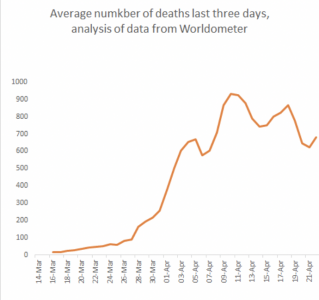 One of the more terrifying aspects of Covid during the early period of infection in the UK was the way it spread exponentially. When something doubles every few days, small numbers soon become exceptionally large numbers.

In today’s press briefing we learned that the number of testing kits available is growing exponentially — for once the laws of mathematics seem to be working in our favour.

The Health Secretary Matt Hancock said that we are ahead of schedule in availability of testing kits — 51,000 new kits today and still on course for 100,000 by the end of the month.

Mr Hancock also made an appeal. He said that the UK government in conjunction with the Office of National Statistics and University of Oxford has begun the biggest viral infection antibody study ever in the UK. 25,000 people will be in the initial phase and this will be expanded 300,000. Mr Hancock appealed to members of the public who are invited to take part in the study to respond quickly. The study will provide vital insights for the ongoing battle against the virus.

Meanwhile, Sir Patrick Vallance, the Chief scientific adviser said that he expected the number of daily deaths to decline slowly for two weeks then more rapidly.

In Germany, however, Chancellor Merkel said that “we are not living in the final phase of the pandemic, but still at the beginning.” She added: “We will be living with this virus for a long time."