Consumer confidence surges, on both sides of the Atlantic, is US set to boom? 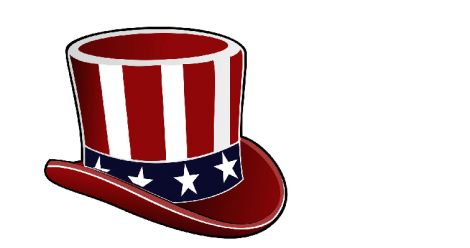 In the US, it is soaring, but in the UK it is doing pretty well too – consumers are in a confident mood. Can it last?

Let’s start with the more spectacular piece of news.

In the US, the closely watched consumer confidence index from the Conference Board has risen to its highest level in 16 years.

It’s difficult to argue with a chart like this. 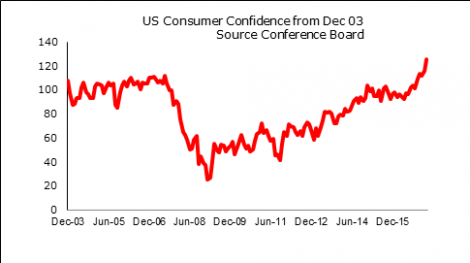 Then again, with US gasoline prices down, job creation still strong and the US equity markets so buoyant, what isn’t there for US consumers to feel confident about?

Except for the threat of protectionism, and giving up on the war against climate change, but then isn’t that the whole point of populism, giving the people what they want? So, if they are getting what they want, should they not be confident?

Capital Economics reckons the index is consistent with a six per cent annualised rise in consumer spending – although it says that in reality growth is not likely to be anywhere near that strong.

Even so, this index points to a pretty impressive year ahead for the US economy.

Meanwhile, in the UK, the latest survey covering UK consumer confidence from Lloyds Bank, is up.

The Lloyds Bank’s regular consumer survey – conducted in conjunction with Ipsos MORI – found that positivity towards personal finances increased by 5 percentage points to 68 per cent last month. That’s marginally higher than at the time of the EU Referendum vote in June 2016.

But there is one worry.

As Lloyds put it: “Resilient consumer opinion does not extend to bricks and mortar, with confidence in the housing market dropping 9 percentage points to 37 per cent, its lowest level since July 2013. Amongst those surveyed, homeowners registered the biggest decrease, falling 11 percentage points to 42 per cent, while renters are now at 26 per cent compared to 31 per cent in January. The majority of those surveyed also continue to have a negative view of inflation; at 53 per cent this measure deteriorated to its worst level since December 2014.”

Robin Bulloch, Managing Director, Lloyds Bank said: “Despite a melting pot of economic uncertainty – from the prospect of Brexit to the impact of inflation – UK consumers are demonstrating a remarkable resilience when it comes to their own personal finances. Of course the full effect of these factors will only truly be felt in the long run, and people may already have one eye on this when it comes to confidence in the housing market.”