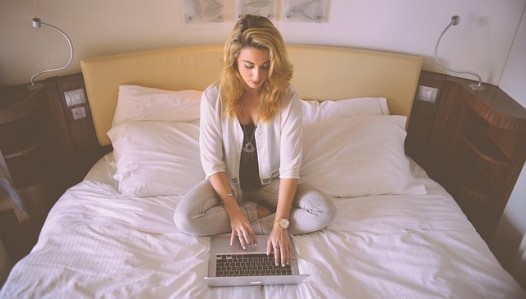 I recently gave up my day job as a marketing executive for a better work/life balance, and to obtain a sense of achievement from building my own successful business. I wanted to personally create something from scratch and something which required little financial investment. I'd long wanted to become an influential writer and marketing consultant, so this is what I set out to do...

Unemployed vs self employed

Once I'd handed in my notice, people began to ask where I was going, what big job I had landed, but when I simply replied I was going to work for myself from home, most people appeared puzzled. They couldn't understand why I would give up a perfectly comfortable job and choose to set up my own business from home. Apparently it's still "not the norm". People have even joked that I'll become a lady of leisure - If only that were true!

I have had to remind myself that I am not unemployed. I am self employed and it is not a new or magical thing, it's just not deemed as conventional. It's not the "safe" thing to do. However, recently every way I turn there are more and more female entrepreneurs sharing their success stories. Take Lady Mone, Baroness of Mayfair OBE for example, she's built a business empire and become one of the most successful entrepreneurs of the modern age. Another female entrepreneur who has influenced me is Chandrika Thomas. Having built up a bridal business she moved on to create and sell her own line of luxury fragrances. I worked with her at the beginning of my career and even then she told I should set up my own digital magazine. At the time I was flattered, but didn't really believe it was something I could do. However, after later gaining experience in an agency, and in another in-house role, I felt as though I was ready.

A new lease of life

Having the confidence in yourself is imperative if you want to set up your own business. If you don't believe you can do it, how will other people? Once you have the confidence and a goal in mind, it opens up a whole world of possibilities. For me, it's as though up until this point I've been letting the world pass me by, and now I am able to take part of the world back and make it my own. I'm lucky to be in an industry that allows me to do this, it's flexible and covers a wide variety of industries.

Apparently it's right on trend too, Millennials want a better work/life balance. Last year Sage reported that 92% of Generation Y identified flexibility as a priority. More recently the Office for National Statistics stated the number of people that now work remotely is the highest since records began. Home workers now account for one in seven of the entire workforce in Britain, with those in higher paid positions accounting for three quarters of home workers. Working remotely, from home allows you to appreciate a new sense of freedom, which is what more of us want, and is what is more accessible thanks to developments in technology.

I know setting up a business and doing it from home to begin with is not going to be easy, there's a lot to learn, which is why I'm going to be sharing my successes and failures on Fresh Business Thinking. Hopefully I will inspire you, help solve issues you have and provide you ideas to help your business grow.