“Throughout my career, I have felt the need to work that little bit harder than some (not all) of my male colleagues to be heard”

An interview with 50:50 The Equality Project: 2021s Team of the Year Award Winner 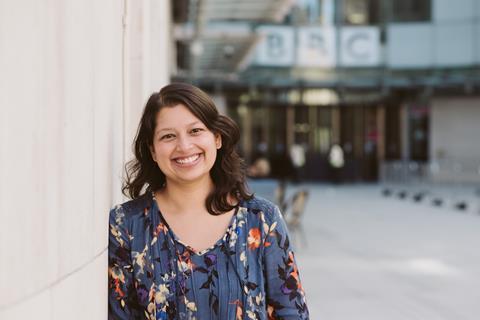 Last year we celebrated the inaugural year of the Great British Businesswoman Series, which saw us shine a spotlight on the fantastic people in business across the United Kingdom who are making a difference for businesswomen, and all of their achievements.

We caught up with last year’s Team of the Year Award winner 50:50, and spoke with Nina Goswami, BBC’s Creative Diversity Lead for 50:50, The Equality Project and News, and discussed what winning this award meant to her and the team, find out more about what they’re doing, and what we can expect to see in the future.

50:50 The Equality Project is committed to inspiring and supporting the BBC and organisations around the globe to consistently create journalism and media content that fairly represents our world.

Nina is a talented, passionate and driven journalist and diversity & inclusion, specialist. She has a fierce work ethic and is a brilliant strategic thinker, and with her taking the lead on 50:50, The Equality Project, we’re seeing them make huge steps to create a better more equal future for society.

Nina’s work and commitment to creating a fairer world, and the work of the team she is leading were acknowledged by our expert panel of judges at this year’s Great British Businesswoman Awards - which saw Nina take away the Team of the Year Award.

“Winning Team of the Year for me is a wonderful recognition of what 50:50 The Equality Project is achieving – and the impact the team is having,” said Nina.

“The central BBC team works tirelessly to ensure everyone involved in the 50:50 Project has the tools at their disposal to increase representation, so the media better reflects our world. Without them we would not be driving the change we are today.

“For me, Team 50:50 is every single person who is making a difference and driving change using our data-driven approach. The 50:50 family is now more than 750 content teams across the BBC and 145 partner organisations in 30 countries. Each member is part of Team 50:50 and I feel each one is being recognised by this award.

“In our most recent Impact Report for 2022, across the whole 50:50 partners network, we’ve seen almost three-quarters (73%) increase in the representation of women in their content,  compared to when they first started using 50:50 monitoring. That is impressive. And it can only happen when we all work together – across organisations.  And that’s teamwork – worthy of a Team of the Year Award.”

Nina is clearly extremely passionate about her role as Creative Diversity Lead and is doing a great job at inspiring her team and those in other areas of the BBC, and beyond. So, we were keen to find out more about Nina’s career journey, and how she ended up doing what she does today.

“When I think about how I got to where I am today – I think about my mum and dad’s kitchen table when I was eight years old. We were sitting there talking about my brother’s future, and there was a moment of silence. We had the six o’clock news on in the background with Moira Stewart reading the news. My dad pointed at the TV and said “I can see you doing that one day,” she said.

“Though the idea of presenting didn’t stick for me, the idea of telling stories about people did. As I grew up, telling stories turned into a desire to inform others of what was going on in the world – good and bad. So, journalism was a natural fit.

“As a journalist – and now in my current role – I have a passion for showcasing voices that are not being heard. I believe that media content should reflect the society we serve. If it doesn’t then we are not covering stories that impact us all. And that is the crux for me. If people are not aware of an issue, they can’t fix it. The media has to shine a light on the plight of all parts of the population – not just the part that can shout loudest. That can only happen if media content is fairly representing our world, which is what 50:50 The Equality Project strives to do.

“And it was through 50:50 that I moved from journalist to diversity professional. It was in the heart of the BBC’s London newsroom in 2017 that 50:50 was born – started by TV News presenter Ros Atkins. The grassroots initiative grew to such a size it needed someone to take the helm full-time – and that person became me (and now Lara Joannides, while I’m on adoption leave).”

With Nina’s work being based around diversity, and exclusivity, we wondered what personal experience she has had with any inequality when it comes to her gender. What has her journey been like on her way to being a team leader? Has she had to face any challenges male counterparts may have not? And how did she fight back for equality?

“50:50 started as an initiative to ensure women’s voices were being heard. Throughout my career – not just as a team leader – I have felt the need to work that little bit harder than some (not all) my male colleagues to be heard” she said.

“I can recall meetings where I would suggest something and be asked to back up my idea. Then in the next moment, a male colleague would suggest the same thing (slightly different wording) and it would be seen as a great idea. Some may know this as “hepeating”, and I have definitely fallen victim to it on more than one occasion.

“So how did/do I overcome this? I still worked/work that little bit harder. Before a meeting, I play out scenarios of the potential questions I might get asked and have answers ready in my armoury. Playing out the scenarios gives me the confidence to hold my own – even if there’s a curveball. Somewhere in what I’ve prepared will be the answer to that curveball.

“Nine times out of ten this approach works, and when it doesn’t, I’ve learnt to speak up: “Thanks to X for restating the idea I’ve just put forward so eloquently.” This approach doesn’t come naturally to me. However – the way I see it – is that if I am to be an advocate for hearing women’s voices, then I need to be heard.”

It’s so inspiring to see how far Nina has come despite her accounts of inequality at times, and the work she is doing is paving the way for the next generation of businesswomen, in both the media world and beyond. With projects like 50:50 around, and with people like Nina in these influential positions, we are seeing the number of women in business grow - which is really exciting. So, we asked Nina, if she had one piece of advice for these women in business, what would it be?

“I pretty much apply the principles behind the 50:50’s three-word slogan to most aspects of my life: count, share, change. I think those three words can do wonders for anyone’s business” she said.

“Count: This is simply about doing your due diligence. When you’ve come up with the business idea or strategy plan do you have cold hard facts that show it can work? Have you identified the potential gaps within the idea and what actions you would need to take to fill them? If so, it is time to share.

“Share: Every good idea needs to be stress tested. Test your idea to the nth degree with your target consumer group. Sometimes it can be uncomfortable feedback but it is the knowledge you need to make your business fly.

“Change: Your focus groups may have picked up on actions you need to take to future-proof your idea. Don’t ignore those actions – make the change.

“And once you’ve done that, start the count, share, change process again. Society, and therefore your consumer base, is changing all the time so to stay ahead you need the answers already at your fingertips.”

Nina’s career has been fruitful to date, so what’s in store for her next - in both her personal and professional journey?

“I am on adoption leave at the moment. I am getting to learn everything about a wonderful three-year-old little girl whose resilience is truly inspiring” she said.

“So for her, my future will see me continue on a mission of creating change – at the BBC and beyond. I want to be leading more innovative initiatives, like 50:50, that create inclusive cultures inside organisations so they can better reflect our world.

“I want my little girl – and all from underrepresented backgrounds – to have the same opportunity as anyone else, and I am privileged to be in a position to do something about it.”