No dallying in the dales: Yorkshire revealed as UK’s Startup Hub 2021

A study carried out by the research team at startups.co.uk reveals Yorkshire as the region most likely to see a post-pandemic startup boom. Not only has the region seen one of the largest increases in startups between 2019 and 2020, it also boasts one of the highest startup densities and startup contributions to regional turnover.

In hot pursuit of Yorkshire is the Midlands, with the West Midlands and East Midlands ranking second and third respectively. On the opposite end of the scale, the study also reveals the East of England and Scotland as the regions least likely to see a startup boom once restrictions have been lifted.

Interestingly, readership data collected by startups.co.uk reveals a sharp increase in people in market towns searching for information on starting a business. This suggests that the pandemic has changed attitudes on where people consider the ideal place to start out on their own.

Why is Yorkshire the UK’s startup hub?

Despite the pandemic, Yorkshire saw a 2% rise in startups from 2019 to 2020 – the second largest rise out of all UK regions. With its startups contributing 14% to turnover and the region boasting a density of 28 startups per square mile, Yorkshire’s healthy scores across the board put it in the leading position.

Home to Leeds, Sheffield, and York, Yorkshire’s thriving cities seem to be proving popular with potential business owners. But it may not just be Yorkshire’s cities that are fertile lands for startups. Data from startups.co.uk’s own website shows the market towns of Yarm and Thirsk could be Yorkshire’s hotspots for those looking to start a business in the countryside.

Luke Ellis is the director of a Sheffield vertical bioponics farm startup, which prior to the pandemic, supplied fresh vegetables to local restaurants and businesses. He praises the city’s ‘entrepreneurial spirit’ and rests the success of his business partially on the Sheffield City Region Launchpad Programme.

To encourage young talent to Yorkshire and to keep local talent from leaving, some startups, including digital marketing company Modo25, are offering perks that are often associated with edgy London tech firms, including top tier salaries and four day weeks. John Readman is the CEO and founder of the marketing startup. They say:

“Thanks to our people-focused approach, we build a positive culture where our team feels empowered to share knowledge, skills, and challenges. We provide market leading benefits, such as a four-day week on a full-time salary. We strive for the perfect work/life balance, which ultimately enables us to hire and retain the best talent in Yorkshire.”

The Midlands is hot on Yorkshire’s tail

The West Midlands (home of Birmingham and Wolverhampton) experienced the largest rise in startups, seeing a 4% increase in new businesses during the first year of the pandemic. Despite having one of the lowest densities, West Midlands startups contributed a respectable 12% to the region’s turnover, bolstering it to second place in the rankings.

In a similar feat, East Midlands startups contributed almost 15% to the region’s total turnover – an impressive figure, considering the region by no means has the highest startup density.

East Midland cities aren’t as sizable as the neighbouring West Midlands city of Birmingham, but a 2% rise in startups in the region means they could be gaining popularity with entrepreneurs.

Startups.co.uk also saw a 12% increase in readership in Kingswinford on the outskirts of Birmingham in the West Midlands, and a huge 32% increase in readership in Castle Donnington – a market town situated between Derby and Nottingham in the East Midlands – meaning it may not just be the cities enticing people who are looking to starting a business.

Despite being home to Edinburgh, Glasgow, and Aberdeen, Scotland has got one of the lowest densities of startup businesses per square mile. It also saw one of the smallest increases in startup businesses in 2020 compared to 2019, suggesting the region’s not particularly popular with those looking to start out on their own.

Meanwhile, the East of England saw a dip in startup businesses in 2020 compared to 2019, which is surprising, considering the region’s proximity to London. 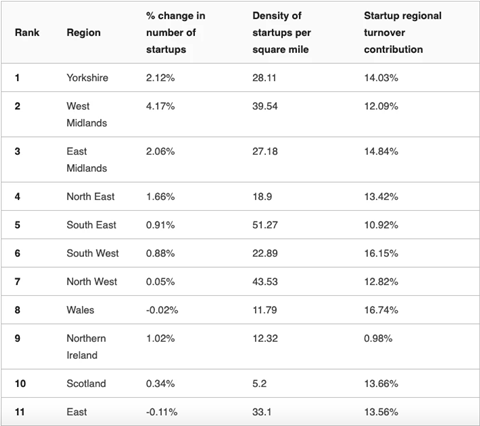 Table 2: Startup hotspots in each region 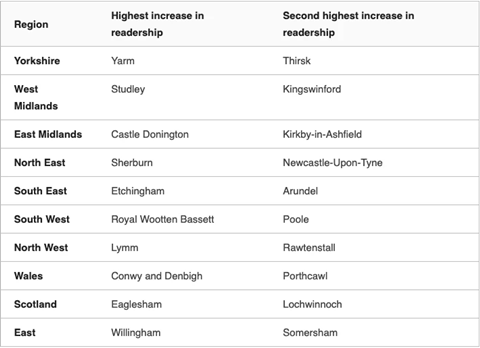 What does this mean for startup businesses?

The pandemic has certainly catalysed a change in attitude towards working life, including how we work and where we work. Thanks to Covid-19, remote working is a solid concept – you don’t need to have an expensive office in the middle of a bustling city to start a successful business. From our readership data, we can see that towns are becoming increasingly popular with startups.

It goes without saying that London will always be a popular place to start a business, but Yorkshire and the Midlands actually saw a steeper increase in startups between 2019 and 2020 than London. This, combined with our local data, does suggest that London may not always be the epicentre of the startup world.

Percentage change in number of startups:

Number of startups per square mile: