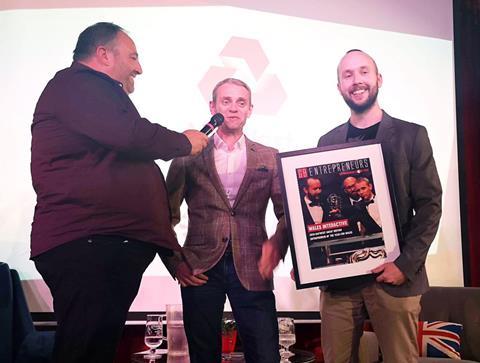 Now in its seventh year, the Great British Entrepreneur Awards celebrate the hard work and inspiring stories of entrepreneurs, rather than the business’ balance sheet.

At a revamped regional final in Cardiff, Banner and Pring also picked up the award for the Creative Industries category for the Wales region.

The pair launched Wales Interactive in 2012 and develops video games across Playstation, Xbox and Nintendo platforms with a particular interest in virtual reality. In its seven years, Wales Interactive has picked up several industry awards as well as several Welsh BAFTAs.

“With over 3,000 entries across the country this year, it really is fantastic to even make it to the regional finals, so to win a category is nothing short of phenomenal. Every winner has different reasons for starting their business, but all are just as inspiring as each other. Seeing what it means to them as they collect their award is incredibly moving and drives us to keep doing what we’re doing by celebrating and supporting these amazing people.”

Gordon Merrylees, managing director of entrepreneurship at NatWest, said: “NatWest is proud to support the Great British Entrepreneur Awards celebrating another year of amazing achievements for entrepreneurs starting and growing businesses from every corner of the country. Supporting entrepreneurs is a key priority for NatWest and our dedicated programme of fully funded accelerator hubs, mentoring, insight and bespoke coaching, is specifically designed to meet the needs of entrepreneurs who want to start, scale and succeed in business. Congratulations to all of the winners and to those who were shortlisted for one of these prestigious awards.”

After picking up multiple awards himself in previous years, S3 Advertising founder Matt Jones saw his team pick-up the Entrepreneurs’ Team of the Year award. Elsewhere, the father and daughter duo of Jeff and Chloe Smith won the Entrepreneurial Spirit award as founders of Big Moose Coffee Co, and Ollie Noakes, founder of rock climbing centre Boulders, was named Small Business Entrepreneur of the Year.

The winners of each category will now go to the National Final of the Great British Entrepreneur Awards, which takes place in London in November.