‘Tis the season to be Jolly (Hog)

In a hall of 1,200 people, few people can claim to dominate the room. And yet, as the founders of The Jolly Hog are announced as Family Business Entrepreneurs of the Year for the South West, one man does indeed do just that. 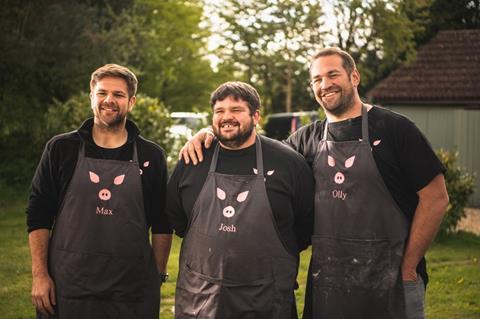 Rising from his seat, Olly Kohn towers above those around him. But then, being a 6ft 7” former rugby player often thrown into the air at the lineout, he’s probably more than used to it.

The former Harlequins and Bristol man is joined by “littlest brother” – both in age and height – Josh, as they take to the stage to collect their award.

It’s a moment that rewards the hard work and journey they’ve been on together with “Middle brother” Max for more than a decade.

“It was quite emotional,” says Josh, reflecting on their win, “just to be recognised was really lovely.”

Max admits they didn’t have high hopes of winning a “such a prestigious” award. “We never actually thought we’d win, but we thought it’d be a nice night out,” he laughs.

He adds: “You don’t really know what you’re going up against, we [think we’ve] got a nice business but other people might think differently.”

Sportspeople often talk of the struggles of coping with a long-term injury – battling boredom, overcoming the psychological impact, the determination to reach full-fitness. That’s exactly where Olly found himself in January 2007 when he suffered an injury that would keep him out for a year.

Though he didn’t realise it at the time, that injury would forge a new path for Olly.

“My wife bought me a sausage-making machine and I just started making sausages,” he recalls.

Despite his rugby career, Olly has always had a desire to make his own moves in the food industry.

“Since I was young, I’ve always dreamt of going into food and starting my own restaurant,“ he says.

The brother had long absorbed the ins and outs of running your own business, watching their father who has his own cabinet-making company. It was a trade that Josh followed while Max became a ship broker.

After some trial and error with his new sausage-making machine, Olly decided he wanted to make a go of it. He says: “After a while, I asked Josh if he wanted to jack everything in and chase the sausage dream with me.”

Now, they stand with an award-winning range of sausages and bacon products. But there wasn’t a big vision, just a desire to follow their passion.

Olly explains: “We wanted to make the best sausages there is, but we didn’t have a grand plan to become a retail brand.”

Having kicked things off with a stand in the car park of The Stoop [Harlequins’ stadium], the dream began to grow. By 2011, Olly and Josh had convinced Max to leave his high-flying London life and head back to Bristol to join the business full-time. 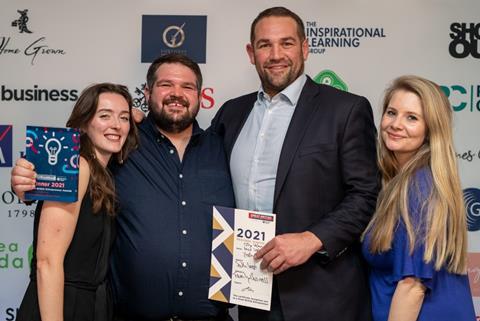 The brothers grew up in Gloucestershire in what they describe as a house ‘full of action’.

Max recalls: “Growing up with three brothers in a household, it was very competitive. We were all big lads who liked to eat a lot. Food was like a currency in our house.”

“I stole a pig in the blanket off of Josh’s plate once, and he stabbed me with a fork,” Olly laughs. “I’ve still got the scar. That’s how much that pig in blanket meant to him!”

“Our house was just busy,“ he adds. “We all had our mates over and our dad even described it as a youth hostel.

“We joke about it, but that’s how we learnt mass catering because mum was just constantly cooking. It was a lively place, packed full of food and action.”

Some entrepreneurs warn of the dangers of going into business with family. Having to fire a sibling or wanting to leave the business can often make for some pretty awkward family gatherings. But for the Kohn brothers, it has felt like a very natural transition.

“I think we do really well at striking that balance because we define our roles,” Max begins. “Although, it was harder at the start because, as a small business, everyone does a little bit of everything.”

He adds: “We all get on [really well], which makes things easier. But the good thing about having a family business is that you can have an argument and forget about it within two minutes.

“There’s an inherent level of trust you get from working with someone you’ve known your whole life.”

“I think we have a really good balance as Max says,” agrees Olly, “Yes, we’ve got three guys that are extremely passionate about what we do, but from day one we trust each other and we all live by the same values.“

For a business that started with ‘no grand plan to become a retail brand’, The Jolly Hog is making a seriously impressive go of it. In August, the company announced it had secured a listing of its products in Asda, adding to its presence in Sainsbury’s, Waitrose, Ocado and Co-op. It is a move that has seen its sales forecast jump to £35 million for 2022.

But without big plans for sausage domination, when did they realise they were really on to something?

“I think really when we knew something had changed when Olly took some sausages to Michel Roux for him to taste,“ says Josh.

The next day, the famed two-star Michelin chef appeared on GMTV during a segment for National Sausage Week and declared The Jolly Hog the best sausages he’d tasted.

Josh adds: “When someone like that enjoys what you do, you realise you probably do have something that’s worth working towards.”

“Ever since that day, we have taken Michel a box of our Porky Black Sausages and our Black Treacle Bacon, and given him a Christmas Jumper, “ says Max. “We always maintain a relationship off the back of that moment, it was a real game changer for us.” 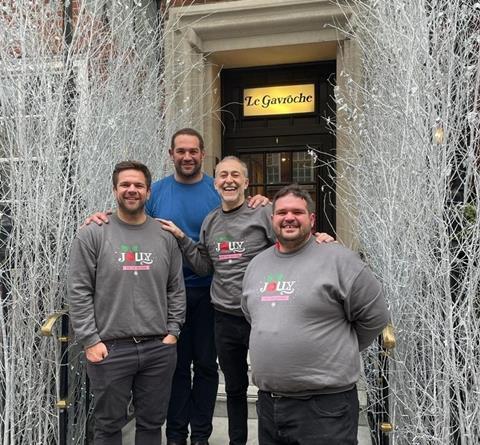 Entering a saturated market is no simple task for an entrepreneur. But Olly, Max and Josh have not only entered it, but staked their claim.

“The big thing for us is the quality of the product,” says Max. “We want something that tastes really good.

“From the start, it was all about having a product that was all about taste. People buy sausages and bacon because they enjoy eating them, not for health reasons, and we’ve always focused on that.”

“We use high welfare pork, which a lot of competitors don’t,” Max explains. “We use outdoor-bred British pork and know a lot of the farmers in our area. We’re really passionate about that side of things.”

It’s not just the quality of The Jolly Hog’s products that has attracted new customers and kept them coming back. It’s the brand itself, as well.

“I think being authentic and being real is important,” says Max. “We’re not a made up brand and I think that always shines through. Customers actually understand there’s people behind the business.”

He adds: “We’re very engaged with our customers. In the retail world, it’s hard to have that relationship because you’re never selling to them directly.”

Despite their rapidly rising sales figures, Olly, Max and Josh still attend outdoor events, cooking and selling the sausages themselves. “On the other side of our business, we do have that so we get some good, honest feedback and we’re able to react and create products that are innovative off the back of that,” Max adds.

A recipe for (avoiding) disaster

Not without its troubles though, like most businesses, The Jolly Hog has gone through some tough times. The Covid-19 pandemic forced a closure of its restaurant, Pigsty, and the business had to rely almost exclusively on retail sales.

“To get into retail is really tough,“ says Olly. “Getting on the shelf is hard, that was probably our biggest challenge. But every other listing is just as hard.”

That’s not the only challenge The Jolly Hog has faced over the past two years. “[We’ve had the] shortage of labour, shortage of cardboard, shortage of CO2,” Olly explains. “But we just need to stick by what we’re good at, which is making great products and marketing ourselves very well.”

“I’m sure we’re in for other hard times across different areas of the business, but we’re a bit more seasoned now aren’t we?” finishes Olly.

So what’s cooking for The Jolly Hog? With a long list of achievements and more to come, the future’s looking bright (and delicious).

“The long term goal is to be the most loved premium meat business in the world,“ explains Olly. “We want the brand to be a household name. We want to be a great place to work and something we’re really proud of.”

From stalls to shelves, and the family dining table to the chopping block, both the brothers and the business have come a long, long way. There’s no real secret to The Jolly Hog’s success, and their story is one that any aspiring entrepreneur can take inspiration from. They followed a passion, built an authentic brand, and most importantly, created quality products.