Reach for the Starlings: 15 young entrepreneurs to watch in 2022

Nothing embodies the spirit of entrepreneurship more than a young entrepreneur, always looking ahead with a fruitful future before them, their endless potential, and fresh eye for businesses. Young entrepreneurs are those introducing us to new ideas and concepts, in the form of new businesses, contributing to the ever-changing world of business. 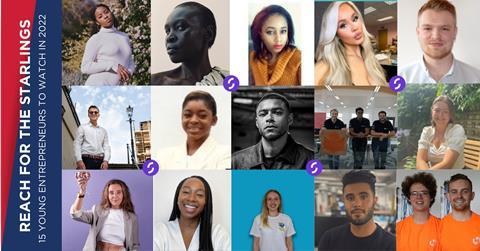 Alongside our partner Starling Bank, the Great British Entrepreneur Awards prides itself in supporting and celebrating the most talented entrepreneurs in the UK.

Read on to find out about the 15 most exciting young entrepreneurs to watch (aged 30 or under at the time of publication) in 2022.

Prejudice exists in many forms and in many places, something all too apparent to Jay Ann-Lopez, founder of Black Girl Gamers. Creating an online safe space and platform, Jay-Ann has already received multiple partnerships, awards and even co-founded a separate business called Curlture. With over 8000 members and growing Jay-Ann has already created a thriving community with Black Girl Gamers that doesn’t seem to be stopping anytime soon.

Campbell Addy, founder of Campbell Addy Studios is a young, professional, London-born photographer, focusing his work around telling a story through imagery. Getting across emotion through pictures is no easy task, but seems to be one Campbell has taken to with ease. With his work and his business already being featured in a variety of large publications, including Vogue, there’s no doubt that there’s heaps of talent behind each and every image.

Next up is another talented entrepreneur with a unique approach to a unique idea. Urenna Okonkwo, founder of CASHMERE initially found herself powering up the corporate ladder in the world of finance, but sought out to create something to help the many clients she came across. Already raising over £100,000 to date through angel investments, CASHMERE provides its users with a smart approach to saving for designer fashion items. With monthly budgets and calculating the likelihood of being able to get the product they want, CASHMERE allows people to buy items they’ve dreamed of, without breaking the bank.

This ambitious young entrepreneur, Chloe Walsh has created a booming business known as Coco Cosmetics. The makeup company was started with a mere £530 by Chloe after receiving her very first investment from her grandmother, now rising up through the cosmetic ranks, Coco Cosmetics has been featured in Vogue multiple times and provides a huge variety of products on its online store. This year Coco cosmetics was also picked up by huge online beauty retailer, Beauty Bay, allowing Chloe to organically expand her brand quickly.

Think your pet deserves a portrait? Adam Reed, founder of Crown & Paw seems to think so too! Providing a premiere pet portrait service, Adam has no issue gussying up your pooch, feline or other pet. Crown & Paw generated millions in its first year alone, no small feat for the young entrepreneur from Leeds, who was inspired to start the business after travelling Europe with his partner and visiting a variety of beautiful art galleries.

Hausbot is the tech-based brainchild of Jack Cornes and Harry Smith, Harry having a deep interest in tech from a young age, pulling apart computers simply to see how they worked as a child, and Jack being business brained since adolescence, the two were a natural match when it came to creating their business. Hausbot provides tech-based services such as a house painting robot and building infrastructure inspection - this could definitely be the future of home servicing.

Lewis Alexander Baxter, founder of Hullo realised there was a gap in the market and addressed it, though not through the conventional means of providing a product, rather by creating a non-profit service that helps struggling individuals. Hullo lets users chat with volunteers throughout the day, not focusing on mental health, rather providing every day, normal conversation. Hullo does, however, still work closely with other mental health charities to refer users if needed.

Jedidiah Duyile has created a fashion revolution with her brand, Loudbrand Studios. Already having items featured on the likes of Kylie Jenner, Loudbrand studios went incredibly viral, selling out its entire stock within mere moments after being tagged on Instagram by the star. Jedidiah has been heavily inspired by her African background, initially starting the business in the evenings after a days work as an events coordinator, making powerful statements with her pieces that have been featured across Elle, Vogue and Bloomberg.

Reece Wabara has had a plethora of experiences at such a young age, one of which being the founding of Maniere De Voir, a sustainable, reliable and durable fashion brand with a focus on quality. Reece is a businessman through and through, though has previously played football professionally including a spot as a defender and eventually captain of the under-16s side of Manchester City. Reece’s grandfather was a Nigerian international footballer, and with such a long history of tackling problems in the family, it’s no surprise that Reece’s resilience has led Maniere De Voir to become a rapidly growing business in the fashion industry.

Priyen Logeswaran, Oliver Rodwell and Mohammed Fadel make up a young entrepreneurial trio behind Reread.AI, a service that allows budding authors to put their pieces to the test by running them through an artificial intelligence evaluator that tests the quality of their work. The three use AI to analyse thousands of books to give writers an accurate response to their work before final drafts. They came up with the business after realising the difficulty that comes along with being a writer.

Emma Lang came up with a creative solution to a problem plaguing creatives by founding State of the Art Marketplace. Beginning as a freelance artist, Emma was upset by the lack of an exclusively art-oriented marketplace where she could sell her products. Realising the strong desire for such a market, Emma began her business which showcases a variety of arts from prints to textiles and collages. With plans to create an even broader set of categories to showcase as many different types of art as possible, the options on State of the Art Marketplace are almost growing as quickly as the business itself.

Lucy Rout, founder of Tabuu wanted to throw away the stigma associated with taking medication, in a sustainable way. Lucy was diagnosed with a rare pancreatic cancer in 2019 and was told she would be required to take medication each time she eats for the rest of her life. After the awful news, Lucy was let down by the lack of sustainable and stylish pill cases on the market. Not one to give up easily, Lucy designed her very own pill case, whilst she was juggling her job at Amazon as a startup development manager after achieving her degree in Business and Management. The stylish and sustainable pill cases definitely filled a gap in the market, and the future of Tabuu looks bright.

Tobi Ajala, the young female founder of Techtree, is no stranger to brand new tech. The former Apple employee has been around tech for most of her professional career. Deciding to take the plunge into entrepreneurship, Tobi realised that her passions could help her produce a product; Techtree. With profits already expected to double this year, Techtree utilises cutting edge technology to provide its users with powerful 360-degree digital solutions and experiences that its users love.

Charlie Blair, founder of The Blair Academy tackled a common problem that was only exacerbated by the pandemic; elderly loneliness. Charlie came up with a fun twist on how to tackle the problem after struggling with loneliness and homelessness at a younger age herself. Discovering that dancing was an enjoyable escape from the common problems she was experiencing, The Blair Academy was born. Initially working as a carer for her terminally ill grandmother, Charlie realised that the problems she had once cured with dance, could also transcend into elderly care. The Blair Academy now provides 1000s of dance workshops in the UK and was even recognised for her work by Prime Minister Boris Johnson, after receiving a letter championing her efforts.

Initially pursuing his passion for tech by taking up a computer science university degree, Sina Yamani, founder of Yoello eventually dropped out of his course to follow an even bigger dream. Founding Yoello to help his friends in the hospitality business, Sina didn’t have any background in business, but that never stopped his drive, nor his business growth. Seeing a huge surge during the pandemic, Sina Yamani now sits at the head of an international business despite his young age.