To celebrate Pride Month, we are featuring the stories of some of our previous winners and finalists from the LGBTQ+ community. 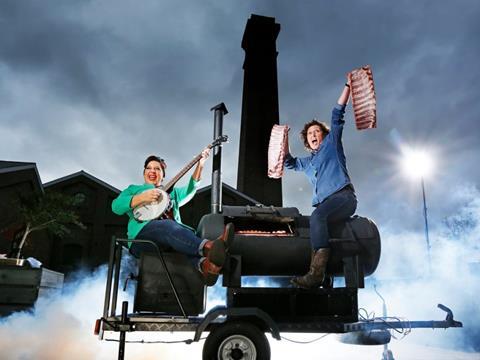 First up is the infectious couple of Sam Evans and Shauna Guinn, founders of Hang Fire Southern Kitchen, who were named Great British Entrepreneurs of the Year for Wales and the South West in 2018.

In 2012, the pair quit their jobs to go travelling together. They embarked on an epic road trip of the southern US states – not to learn about BBQ, but because of their love for Dolly Parton. But it was during the trip that they discovered a love for American BBQ.

They had a chance encounter with revered chef and TV personality Aaron Franklin. Aaron’s values, ideas and style really struck a chord with Sam and Shauna.

“He was using ethical meat, usually unheard of in barbeque and making everything from his sauces and rubs to the custom-built smoke pit he welded himself,” the couple said.

“Meeting Aaron both inspired and motivated us that this style of American barbeque was exactly what we wanted to bring to the sunny shores of Wales, keeping the same attitude, core values and secret recipes we learnt during our time in the US.”

Combined with a love of people and music, Sam and Shauna knew they had a winning combination to start a BBQ restaurant. They initially bought a smoker and old pub in Cardiff before moving to their existing location in Barry.

Long before the limitations of Covid-19 restrictions, Hang Fire Southern Kitchen was regularly fully booked for months on end – Sam in the kitchen and Shauna running front of house. And it wasn’t long before they bagged their own TV show with BBC Wales. 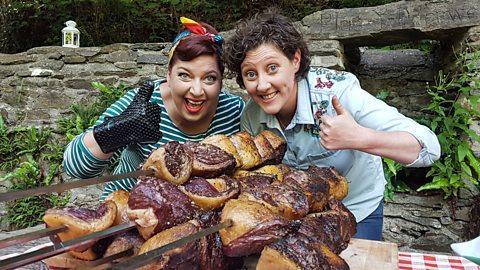 The pair first met over twenty years ago, but it was a somewhat strange turn of events that led them to reveal they were a couple in front of 11 million people.

Preparing for an appearance on BBC’s Saturday Kitchen in June 2020, they realised that the audience might have expected them to be sat two metres apart to maintain social distancing.

“We wanted to explain that we’re a couple,” Sam said in an interview with WalesOnline.

“I think it is important to bring these things to the front, so we can be role models, so we can be torch bearers if you like. It’s completely fine to be who you are.”

She added: “I think there’s a lot of people marginalised in society, especially the trans community, the queer community and I just think these are the subjects we really need to be talking about.”

In fact, it was supposed to be their wedding day, but they couldn’t tie the knot because of Covid restrictions.

“It fills my heart with joy to see smaller communities getting together behind the pride movement. It’s not just about the big cities having these huge celebrations of gender and sexual diversity, our home of Llantwit Major and our second hometown of Barry get behind things like that.”

Unfortunately, Sam and Shauna haven’t been able to tie the knot yet, admitting they’re “wedded to the restaurant” for the foreseeable after the challenges of owning a business in the hospitality sector through the pandemic.