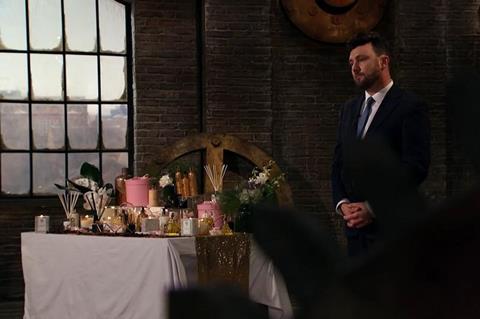 Drew, who was a finalist in the North West region in 2018, makes a range of vegan soy wax candles, eau de parfum fragrances as well as a bath and body collection. Sales have surpassed the £1 million through the Owen Drew website and a network of independent retail partners.

He started the business from home five years ago and has claimed celebrity endorsements, and national and international press for his ‘Aphrodisiac Candle’ and world’s most expensive retail, worth £750.

The entrepreneur told the Dragons that he had previously owned a business, opening a hotel on Manchester’s Canal Street, which subsequently failed a year later, and led to a breakdown and diagnosis of bipolar disorder. He laid greater importance on relaxation and wellness and launched Owen Drew with that focus front and centre.

Suleyman was sold on the wellness message and secured a 30% stake in Owen Drew.

Just last week, it was announced that former GBEA winner and Social Chain founder Steven Bartlett will become the latest Dragon to join the Den, replacing outgoing Tej Lalvani, becoming the youngest ever Dragon in the process.