Each month we celebrate a member of the GBEA community who has shown incredible entrepreneurial spirit. For their efforts, they’ll receive bottles of classic Double Cask and Victoriana single malt Scotch whiskies, courtesy of our partners, Glen Scotia Single Malt Whisky. 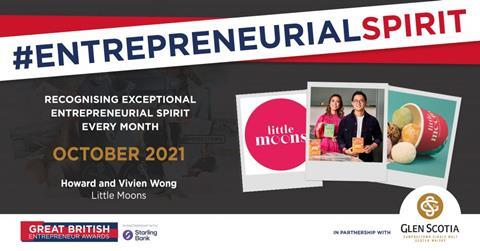 And we’re delighted to announce that October’s winners are Vivien and Howard Wong, co-founders of Little Moons!

Little Moons went viral on TikTok in the UK in January this year; with over 500 million views on the platform, it’s no wonder Tesco sales of the product rose by 2000%.

Vivien and Howard, the sibling super-duo, decided to take the plunge and quit their corporate jobs in 2010. Initially transitioning to setting up shop in their family bakery, they kept their parents’ passion alive by filling a noticeable niche in the rising Asian food market. Despite sushi as far as the eye could see, Vivien and Howard noticed there was a significant lack of quality desserts.

Only delving into retail in 2015, it took two years to initially push their product to the shelves with businesses like Ocado. However, the brand’s social media success caused retailers to start eagerly lining up to stock their shelves with Little Moons. Now the delicious desserts can be found in all major supermarkets.

With incredible success comes even bigger plans. Now operating in their biggest factory yet, Little Moons plans to release the world’s first mochi ice-cream advent calendar, available this November. Accompanying the widely anticipated calendar, even more flavours are being released by the increasingly popular brand, amongst their now substantial following.

With the soon to be released advent calendar and brand-new flavours to be available on their recently revamped website and e-commerce store, Vivien, Howard and Little Moons are clearly set for post-pandemic success.

Iain McAlister, distillery manager at Glen Scotia Single Malt Scotch Whisky, said: “With a bold business plan, buckets of creativity and a fascination for flavours, Vivien and Howard from Little Moons are our kind of people.

“Flavour is one of the joys of craftsmanship. Finding new ways to delight people through innovative flavours and exciting new products is one of the best parts of the job here at Glen Scotia, and it’s at the heart of Little Moons’ success story. Congratulations to Vivien and Howard on behalf of the whole team at Glen Scotia.”