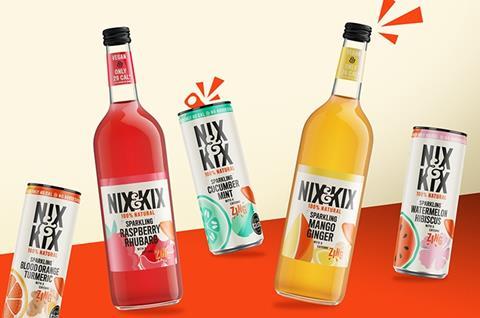 It comes alongside the news that Nix & Kix signed a distribution deal with Iris Nova, the Coca Cola-backed soft drinks maker and distributor. It will see Nix & Kix’s five-strong range of cans – Mango Ginger, Cucumber Mint, Blood Orange Turmeric, Raspberry Rhubarb and Watermelon Hibiscus – distributed across the US through Iris Nova’s direct-to-consumer platform.

Nix & Kix is a brand of exciting, adventurous and natural soft drinks that offer non-drinkers or nominated drivers a more interesting alternative to an orange juice. After a lot of experimenting in their kitchen, Julia and Kerstin came up with a range of drinks that were not only low in calories, all-natural and without any added sugar – they also tasted amazing. Adding cayenne allowed them to remove sugar without compromising on taste and gave the exciting ‘zing’ that makes our drinks so special.

Since then they have grown rapidly selling over five million products through over 7,500 distribution points and are now being sold across the UK, Europe and the Middle East. Nix & Kix can be found in Tesco, Sainsbury’s, Morrisons, Ocado & Waitrose; convenience such as BP Petrol stations and casual dining outlets including Nandos.

The brand is now overfunding to ramp up marketing investment, boost their e-commerce and grow their sales team. The capital will also be used to expand their operations to keep up with growing demand.

“The partnership with Iris Nova couldn’t have come at a better time” said co-founder Julia Kessler “We just finished a re-brand which was well received by the trade, and based on initial feedback we expect the US to be a great opportunity”.

“Crowdfunding is an exciting step for us as we continue on our mission to be the leading premium soft drink brand” added co-founder Kerstin Robinson. “We’ve built a strong platform for growth and I am excited to give our customers the chance to become shareholders.”