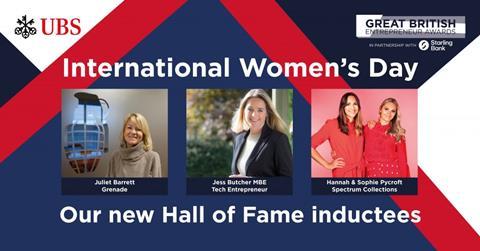 Hannah and Sophie Pycroft are the sister-founders of Spectrum Collections, ‘the world’s most Instagrammable makeup brushes’. They started the business from their garage in Barry in South Wales and have since gone from strength-to-strength, collaborating on unique designs with Disney.

Juliet Barratt is the co-founder of sports nutrition brand Grenade. Since launching in 2010 with just £27 in the bank, the brand has grown to seismic levels and consistently been one of the UK’s fastest growing companies, even becoming the biggest selling chocolate bar in the UK in its size category.

Jess Butcher MBE is best known as the co-founder of Blippar, the tech company that became the UK’s first unicorn in 2015 with a valuation of more than $1 billion. She later co-founded Tick.Done, a micro-video platform designed to build skills and is now one of four commissioners on the Equality and Human Rights Commission. She joined the Great British Entrepreneur Awards judging panel in 2019.

“The Great British Entrepreneur Awards community is blessed with plenty of incredible women, from the winners we’ve had over the years to the judges and partners. I’m honoured to have worked alongside them since launching in 2013 and look forward to celebrating women in business for years to come.

Giles Nicholas, managing director at UBS Wealth Management, said: “At UBS we know how important it is to support women in business. As sponsors of the Great British Entrepreneur Awards Hall of Fame, it is wonderful to see such great women entrepreneurs being recognised for their achievements. They are an inspiration to others and a much-needed boost for UK PLC.”