Each month we’re celebrating a member of the GBEA community who has shown incredible entrepreneurial spirit. For their efforts, they’ll be sent bottles of classic Double Cask and Victoriana single malt Scotch whiskies, courtesy of our partners, Glen Scotia Single Malt Whisky. 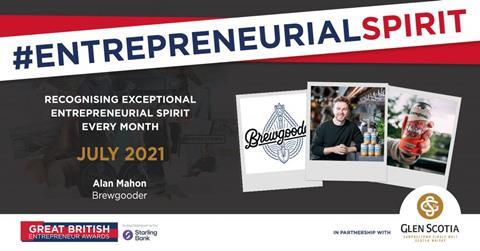 And we’re delighted to announce that July’s winner is Alan Mahon, founder of Brewgooder.

2021 has already been an exciting and incredibly inspirational year so far for Alan and Brewgooder. In February, the company invested £50,000 to improve infrastructure tackling Covid-19 in Malawi, and a month later it pledged to deliver one billion pints worth of clean water to developing countries over the next three years as it announced a new partnership with Charity Water UK. It didn’t end there, however. In April, Brewgooder unveiled its interactive ‘tracking’ can which allows its drinkers to track the global impact of that beer.

Now, in July, Alan and Brewgooder are celebrating even more success and impact with the news that it has been named among the top 5% of B-Corp companies in the world for its community-based sustainability credentials. In addition, it also announced a distribution deal with Co-op, which will see its Tropical Pale Ale sold in 350 stores, keeping Brewgooder on track to double its year-on-year sales.

A winner of the Great British Entrepreneur of the Year award for Scotland and Northern Ireland in 2017, Alan launched Brewgooder in 2016 after contracting a parasite from contaminated water on a trip to Nepal in 2012.

Recognising that someone similar to him would be born into an environment without safe water and have their future limited by a past they did not shape, Alan dedicated himself to fighting water poverty. However, he was rejected for every job he applied for, so decided to launch his own business that would fight water poverty through beer.

Brewgooder was founded on a belief that the beer we enjoy together can be a force for good. Since day one, every Brewgooder beer has been ‘Brewed on Purpose’; to create waves of people-positive change. Through this commitment, its drinkers know that with every sip, they are helping to empower the lives of others.

Iain McAlister, distillery manager at Glen Scotia Single Malt Scotch Whisky, said “It’s been an outstanding year for Alan and the Brewgooder team, with the recent B-Corp news just the tip of the iceberg.

“It’s an incredible accolade, and with Glen Scotia celebrating its own exciting news after our 25 Year Old was named ‘best whisky in the world’ this year, we wanted to take a moment to recognise a business at the top of its game.

“Alan is a truly inspiring winner for this month’s Entrepreneurial Spirit prize – he has built a brand with the power to deliver great work across the globe, with a tangible impact. Everyone here at Glen Scotia is looking forward to watching Brewgooder’s journey as they continue to make waves whilst providing access to one of our most valuable resources for those who need it most.”

You can find out more about Brewgooder’s mission to end water poverty here.