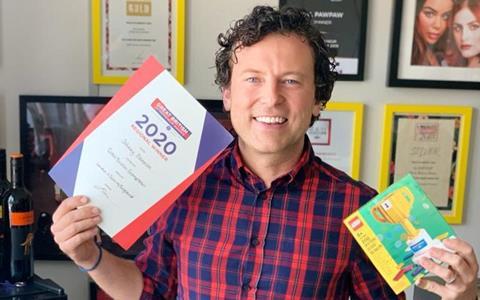 Completely unaware of why an awards co-host might be video calling a few days before an awards ceremony, he was stunned to silence when Oli revealed the news that Johnny was being named Great British Entrepreneur of the Year for 2020.

To celebrate the opening of our application window and the search for the 2021 Great British Entrepreneur of the Year beginning earlier this week, we had a (virtual, obviously) chat with Johnny to talk about his story, and what the award means to him.

Johnny’s career started out as an office assistant in the family PR business in 1996, before rising through the ranks and taking over the reigns in 2008.

“It allowed me to learn first hand the success that could be achieved with a brand,” Johnny says.

Inspired by his young daughter’s struggles with eczema, he saw an opportunity for a range of natural skincare products and balms that provided an alternative to the harsh steroids being recommended. Johnny and his wife Pauline launched Dr. PAWPAW in 2013. Remaining dedicated to the family business, Johnny continued as managing director until the end of 2020, juggling both businesses for over seven years.

“At the beginning, I wanted to create enough financial wealth for my family so we had the freedom to do what we wanted. I knew, as a family, we were going to need to make sacrifices to get where we are now,” Johnny said.

Shaking up the stagnant

Dr. PAWPAW entered the multi-use balms market after decades of dominance from the major lip balm brands. It launched as a range of multi-purpose beauty products with the best natural and sustainably sourced ingredients.

Johnny explained: “What makes us unique and what really makes a difference to buyers and business partners is that we were the UK’s first pawpaw balm. We were the first to launch tinted versions globally of the original balm and we also were the first to create a formula that used a trio of beneficial ingredients pawpaw (papaya fruit), aloe vera oil and olive oil.”

He added: “I was lucky enough to be involved in the industry and have that insider knowledge. I knew what worked and what didn’t, so when the opportunity came up I was confident I could make it work.

“There are always risks, but I truly believed that with a great team around me we could all create something really special.”

A core element of the Dr. PAWPAW brand is playing its part in the mission of inclusivity, helping the planet and its people. It’s a brand with a purpose.

The packaging is 100% recyclable and the long-lasting product encourages minimal waste. They’re entirely vegan and cruelty-free, developed to suit all skin types and textures.

“We can say with confidence that we are an inclusive brand that is suitable for everyone,” Johnny adds.

As an employer, it encourages flexible working hours and provides a wide range of benefits for a dedicated and diverse team. Dr. PAWPAW promotes and supports multiple charity organisations, including The Ghanian Women’s Project, LGBTQ+ charities including Galop UK and Stonewall UK, anti-racism charities including Black Lives Matter, Show Racism the Red, Stand up to Racism and Southall Black Sisters. This year, it is working with the Teenage Cancer Trust, donating 15p from each sale of its Shimmer Balm as well as a percentage of its annual turnover.

“Although I wanted to make enough for financial freedom at the start, there has always been a long-term goal to give back as soon as the company was in a position to do so,” Johnny says.

“We have partnered with so many charities in big and small ways. We’re always trying to do what we can both financially and in other ways to make a difference to people and organisations in need.”

While the Covid-19 pandemic created huge challenges for so many businesses, Johnny stuck to his commitment to helping others.

At the time of submitting his Great British Entrepreneur Awards application, Dr. PAWPAW had donated 50,000 of its products to frontline health workers around the world who were suffering from damaged skin thanks to PPE and the increased use of hand sanitisers. Now, 12 months on from the start of the first lockdown, Dr. PAWPAW has donated 125,000 products to frontline workers.

Dr. PAWPAW is now stocked and sold in more than 30 countries around the world, including the likes of Sainsbury’s, Waitrose, Harvey Nichols, Oliver Bonas, Boots and Amazon in the UK. But with the pandemic reducing the number of consumers entering shops, like many entrepreneurs, Johnny recognised the opportunity to sell his products directly to the consumer through its website. And that was made possible because of the community Dr. PAWPAW has created and established across social media.

Despite the tumultuous environment so many businesses found themselves in throughout much of 2020, Dr.PAWPAW actually saw 100% growth over the year. Those challenges, Johnny says, made the company’s growth and being named Great British Entrepreneur of the Year all the sweeter.

He said: “To be crowned Great British Entrepreneur of the Year really was a massive achievement for us. It gave that recognition to our team for all their incredible hard work. Our growth was unbelievable over the course of the year, considering the pandemic. But it continued to grow and to cap off the year by winning the award was absolutely amazing.”

“It has given a stamp of authority with others,” Johnny added. “It shows people that we’ve moved on from being a little disruptive start-up. We’re moving in the right direction, we’re here to stay and we’re here to keep growing in the years to come.”

So many of our winners over the past nine years have talked about how uncertain they were about entering, or their certainty that they would win. And Johnny is no different. He never expected to win a category at the regional final, let alone end the year as the 2020 Great British Entrepreneur of the Year.

“Be honest. Tell people what your business is about. Highlight your success but be honest about the pitfalls. That has been really key for us entering any award process.

“But above all, have the confidence to at least try. You only stand to benefit from entering, whether you come out a winner or a finalist, or just by taking the time to sit and think about your business.”