We are delighted to announce the six newest additions to the Great British Entrepreneurs Champions Hall of Fame. 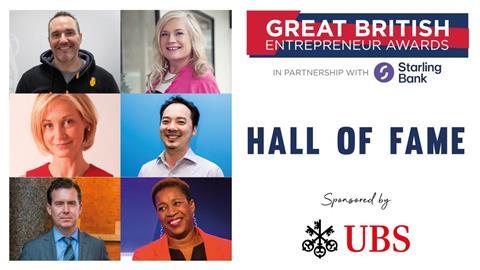 We are delighted to announce the six newest additions to the Great British Entrepreneurs Champions Hall of Fame.

Supported by UBS Global Wealth Management, the group was inducted as part of the Great British Entrepreneur Awards National Final.

Alan Barratt is himself a winner with GBEA, having been named Great British Entrepreneur of the Year in 2018 alongside his wife Juliet. He joined as a judge a year later and has since been once of our most active and engaged supporters.

Alison Edgar MBE is another previous winner, picking up the Special Merit Award in 2015. She too joined the judging panel, establishing herself as one of our most passionate supporters and supporters of entrepreneurship.

Chieu Cao, Evadney Campbell MBE and Michael Jacobsen have all been members of the judging panel for a number of years and continue to show themselves as willing supporters to both GBEA and the wider community of entrepreneurs, consistently providing the help and advice they need to grow.

Finally, Mich Turner MBE joined the judging panel this year, but has already shown her dedication to supporting the cause of entrepreneurship right across the UK and as part of the GBEA community.

Over the past eight years we have built a supportive and connected ecosystem of entrepreneurs, mentors and investors through the Awards. The community of business talent and support that the Awards have brought together has thrived beyond what we ever imagined. At the heart of the community is a panel of judges who work to support and champion entrepreneurs of all stages.

You can view the full list of inductees in the Great British Entrepreneurs Champions Hall of Fame sponsored by UBS Global Wealth Management here.