Long term friend and partner of The Great British Entrepreneur Awards, Guy Rigby has recently taken on his latest endeavour, crossing the Atlantic Ocean in aid of supporting and enabling entrepreneurship.

In the summer of 2019. Guy had just turned 66 and was looking for his newest challenge. After spending most of his life working with and advising entrepreneurs, he recently become far more interested in the concept of social entrepreneurship, where people and planet, as well as profit, are at the centre of the business agenda. This is the so-called “triple bottom line” and the domain of the social entrepreneur.

In order to fund his wish to enable and support this great cause, fundraising quickly became Guy’s focus and after rowing with the Marlow Rowing Club on the Thames in 2014, Guy settled on the idea that rowing seemed like an appropriate choice. The Talisker Whisky Atlantic Challenge beckoned and a chance telephone call with the son of a friend who had recently succumbed to cancer yielded an enthusiastic response. So it was that David, an extreme sports enthusiast and a strong supporter of entrepreneurship, joined the crew – and The Entrepreneur Ship was born.

The Entrepreneur Ship has taken part in the ‘ worlds toughest row’ – The Talisker Whisky Atlantic Challenge (TWAC) – beginning in December 2021, and crossing the finish line in February 2022. The row is said to be so difficult, that more people have been into space or climbed Everest than have rowed the Atlantic. The vast majority of teams that take place are built of four members, where rowers typically operate on the basis of two hours on/ two hours off for the duration of the race. Rowing with a smaller crew is obviously far more challenging, with more responsibility for each crew member, more isolation and, somewhat obviously, a slower and longer crossing – which is what Guy and David were faced with. The average travel time is hugely weather dependent, but most four-man crews take 35 to 45 days, with smaller crews typically having to endure far longer travel times, exposing themselves to the elements of sea, sun and storms.

Against all odds, Guy Rigby and crewmate David Murray have set records, becoming the oldest pair to cross the Atlantic Ocean, in an incredible 53 days 3 hours and 42 minutes. What an achievement!!! 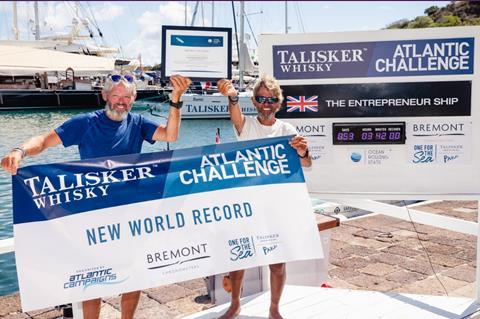 Entrepreneurship is key in the growth of the global economy, it is entrepreneurs who innovate and disrupt the status quo and create new, sustainable, solutions that help reinvent the world. Entrepreneurs create new jobs and increase wealth, support local communities and it will be entrepreneurs who solve many of the challenges that our world faces today.

However, entrepreneurship is changing, and increased awareness of environmental and social challenges, together with growing accountability and scrutiny from the media and the public at large, means that businesses are increasingly focusing on people and the planet as well as profit. Guy’s motivation is to increase awareness around the benefits of entrepreneurship, and to have the funding to do so – through raising money for a charity that finds, funds and supports entrepreneurs.

All of the funds raised will be donated to UnLtd, a foundation that supports social enterprises, aiming to help develop a generation of social leaders.

Guy and David have raised an incredible £60,000 for the charity through the race, and are continuing their fundraising to ensure they can provide as much support as possible. You can still donate to this amazing cause, and your donation will be doubled! Donate here