Honest Burgers teams up with Uber Eats to encourage Brits to be more honest!

Honest Burgers, co-founded by Great British Entrepreneur Awards judge Tom Barton, is teaming up with Uber Eats in their latest campaign – to get brits telling some ‘tasty truths’. 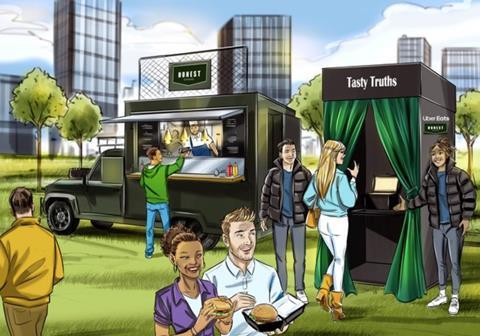 The ‘tasty truths’ pop-up booth will be visiting Liverpool and London over the next two days (27th & 28th October) in a bid to encourage more lighthearted honesty.

The pop-up will open up to the public at lunchtime from 11:30 – 14:30. So, why not go and fess up to your fibs and be rewarded with a free Honest Burger, as well as a code to get money off your next Honest Burger order, which is now exclusively on the Uber Eats app.

So, what are the top things we Brits lie about?

The best way to relieve the guilt you feel when lying? The research revealed it’s confessing! 2 in 5 (43%) of us say we don’t think we’re a convincing liar and the person we lie most commonly to is our partner, with 46% of people admitting to telling them a fib. This was closely followed by colleagues (44%) and bosses (36%).

The Burger Confessional will be touring Liverpool and London as both regions were identified as having the highest number of fibbers, with nearly half of Londoners (46%) admitting to telling between 6 – 16 lies per day, with the same applying to those in Liverpool (47%).

London locals appear to be a forgetful bunch, with “I forgot” being the most commonly told lie (31%). In Liverpool, “I’m listening” is also a common fib, with 16% admitting they’ve told that particular lie.

Discussing the campaign Tom Barton, Co-founder of Honest Burgers says: “We are thrilled to have partnered with Uber Eats to bring our delicious burgers to the nation – and we promise that’s the truth! We can’t wait to hear the white lies our customers have been telling, and to reward them for their honesty in the best way possible! For those who want to remain Honest from home, they can now order from our menu exclusively available on the Uber Eats app.”