Few would predict that a young girl from the southwest of Iran, who loved nothing more than to sit by the beach at sunrise writing poetry, would go on to become an award-winning entrepreneur in the UK. But, for Shahnaz Rabiei Far, her journey has an air of inevitability about it. 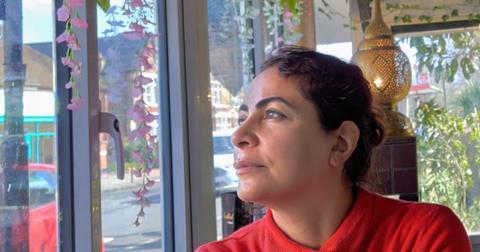 “I grew up in a small fishing village called Arvandkenar in Abadan County, Khuzestan Province in Iran,” Shahnaz begins. “Although we were a low income family, we were very tight and loving. Everyone in the village was like family to me, the community was so supportive and loving.

“Being brought up in such an environment really honed a sense of community and care for everybody.”

Shahnaz’s family regularly took part in community activities and events. At the age of 10, she won a community-wide debate competition. Standing on stage collecting her winner’s medal, she was asked what she wanted to do when she grew up. A young Shahnaz answered: “I want to help my community in any way I can.”

That determination to help people sparked a dream of becoming a doctor, inspired by the story of Marie Curie.

“We watched a movie about her on our small, family TV when I was 9,” Shahnaz recalls. “It was her passion, drive, curiosity and eagerness to help people – even though I never became a doctor, she has continued to inspire me to keep dreaming and do my part to help people, whoever they are and wherever they are.”

During the Gulf War of the late 1980s, Shahnaz became a nurse, helping to treat people on the frontline, regardless of which side they were on. There was a public outcry for people to become nurses, to join the frontlines and help care for the wounded. At the time, Shahnaz was a public school teacher with two young children and younger siblings to care for.

Despite her own responsibilities, Shahnaz knew she had to head the call and do her part to help those in the direst of need.

“They were mostly kids,” Shahnaz begins. “They still had their futures ahead of them. Yet, there they were, on the frontlines and on treatment tables fighting for their lives.

We had very few medical supplies, so we had to be resourceful. I was taking out bullets with a kitchen knife and little or no anesthesia.

“That was my toughest experience,” she says.

“Despite all of the horrors, I knew that I had to help others, no matter their background or identity.”

“Those experiences feed my conviction to keep helping people however I can, no matter what. I will continue to do my part every step of the way.”

Frontline to founder to fitness

Despite the dream of becoming a doctor, creating businesses has always been a passion of hers. In 1997, Shahnaz created an NGO for women’s rights and a shelter for abused women in Bahrain. Then, in 2009, she launched a real estate business that helped to provide housing for single mothers on low incomes in the US.

She explains: “I am a serial entrepreneur. I always look for ways to support my independence through a sustainable business that meets market and societal needs. I try to think of solutions to problems that resonate with me the most.”

Along with her co-founders Mahdi Almubarak and Ebrahim Hameed, Shahnaz launched FitQuid – a health and wellness app that is designed to motivate people to live a healthier lifestyle, and pays people in digital coins – fittingly named FitQuids – for staying active and completing personal and public challenges.

“The idea first came to me in January 2018 when then-Prime Minister Theresa May announced plans to create a ministerial lead for loneliness. I thought about how we could motivate people to get out and meet others,” Shahnaz explains.

Exercise is often something people like to do together, and it seemed a natural fit.

“Just like the early days of any start-up, it was a mix of excitement, hard work and frustration – we had to be adaptive and remain flexible. FitQuid has gone through a period of evolution and we were willing to make mistakes, to learn and to adapt.”

Bringing innovation to the UK

Shahnaz, Mahdi and Ebrahim moved to the UK to create FitQuid.

“The foreign entrepreneurship facilities provided by the UK government and support available from other organisations made the UK an obvious choice for us,” she says.

The support of Fortunis Capital was instrumental in both their decision to come to the UK and the journey that FitQuid has taken. The partner for the Great British Entrepreneur Awards’ Foreign Innovation Award, Fortunis Capital is an impact investment firm. It only supports businesses that deliver positive and tangible benefits to society and the world. An endorsing body for the Home Office, Fortunis supports foreign entrepreneurs to launch and grow their business in the UK.

Shahnaz says the support provided by Fortunis has been invaluable: “It’s safe to say that the help of the Fortunis Capital team has been instrumental throughout our journey. They provided crucial support in scaling the solution, accessing a massive network of potential partners and clients.

“Beyond their support on a professional and technical level, we’ve grown close with the Fortunis team and have truly enjoyed working together – that relationship has allowed us to have open and fair discussions.”

Shahnaz’s incredible story led to her, Mahdi and Ebrahim winning the Foreign Innovation Award at the Great British Entrepreneur Awards in 2020.

“I would describe winning the Foreign Innovation Award as our biggest achievement so far, especially winning it so early into our journey with FitQuid,” Shahnaz says.

“It has meant so much to us – being recognised by some of the top experts in the industry has validated so much of what we’re doing.”

She adds: “Winning the award provided us with a massive boost to brand awareness and our social media preference. In the two weeks after the National Final, our following on Facebook and LinkedIn grew by 200%.

“More importantly, it has provided us with the opportunity to meet incredible entrepreneurs who are running incredible businesses, and we have gone on to create partnerships with members of the community.”

FitQuid is still in its early stages, but Shahnaz, Mahdi and Ebrahim’s vision of the future is bright.

“We all share a single vision,” Shahnaz says. “Our paths might differ slightly, but as long as we share the same direction we are absolutely confident we will succeed.”

“We want to continue investing and creating jobs in the UK. We want to do our part to support the community that has made us feel so at home since the day we arrived here,” she adds.

“We look forward to growing FitQuid and building partnerships with different organisations that share the same vision of providing a solution that works for everyone – individuals and the community.”

If you want to follow in the footsteps of Shahnaz, Mahdi and Ebrahim and win this year’s Foreign Innovation Award, you can enter here.