We’ve all seen the stories of recent graduates taking to the streets in search of a job. They might be holding a sign or handing out CVs at a train station. It picks up national press coverage and before long, they get a host of interviews. 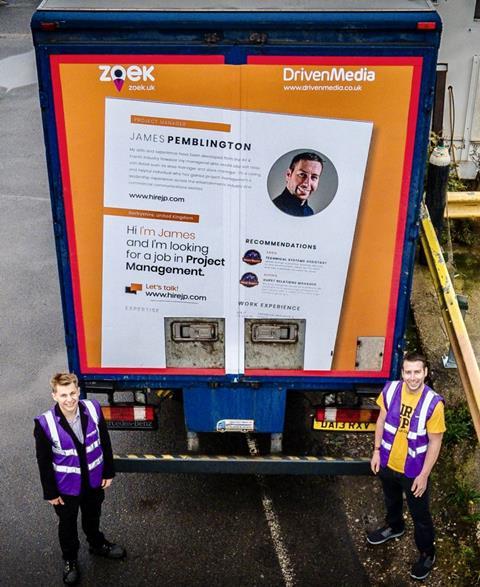 Well, one of our previous winners has stepped it up a notch. Ed Hollands, the founder of DrivenMedia who was named Creatives Industries Entrepreneur of the Year for the Midlands in 2019, has helped a jobseeker find a new job with a giant mobile CV displayed on the back of a lorry.

James Pemblington hadn’t worked for eight months, having been placed on furlough in March and made redundant in the summer. He’d tried everything to get a new job but was unsuccessful despite his innovative ways of getting employers’ attention – including a digital CV and portfolio placed on a QR code on a chocolate brownie.

Ed Hollands teamed up with the fast-growing jobs board Zoek to run a competition, placing the winner’s CV on a truck to be seen by thousands of people. James was chosen from a pool of 200 hopefuls for his determination and unique approach.

The innovative mobile campaign launched on a Wednesday, and James was contacted on Thursday, interviewed on the Friday and offered the job on Saturday. He secured a three-month contract as a deputy site manager with Serco at the Burton-on-Trent Covid-19 Track and Trace Test Centre.

“It usually takes about three weeks to get a successful outcome through this type of advertising,” said Ed Hollands. “But this campaign took only 48 hours!”

Ed confirmed that the giant CV was seen by at least 100,000 people as it started its journey in Nottingham, making a delivery in Birmingham and returning via Burton-on-Trent. It was seen by the right person, in the right place at the right time. Ed was thrilled to have been able to help James and said: “We couldn’t have hoped for a better result.”

Diana Campbell, Zoek managing director said: “Seeing James get a job after only two days of the giant CV going on the road shows how he only needed to be put in front of the right audience! Everyone at Zoek wishes James the best in his new role and we are delighted to have been part of the team that made this a reality.”

James is looking forward to starting with Serco in November after some initial training and is hoping that his contract may be extended at the end of the three months. “Yes, it is a short contract” said James. “However, I really appreciate being able to get back to managing a team, serving the local community and supporting this great company. I feel so lucky and grateful to Zoek and DrivenMedia for giving me this opportunity.”

In the meantime, James will be thinking up some more attention-grabbing initiatives to get himself noticed in the job market if his contract is not extended. “I was thinking of using smell,” joked James. “Perhaps a scented flower attached to my CV to indicate the ‘sweet smell of success’! Set your calendars for three months time, as I will be spamming your timelines with crazy ideas once again! Until then – I’m off to work!”