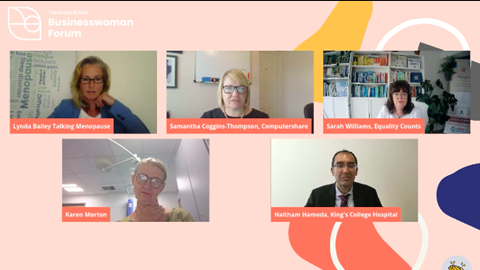 Menopause in the workplace, attracting non-male candidates, and much more is on the day one agenda for The Great British Businesswoman Forum

Equity fundraising expert, Julia Elliott Brown got the morning’s talks underway with a deep dive into her personal experiences as a woman in the business world.

Julia underlined how most of her business advice came from out-of-touch senior-level men, and explained to get past that you “don’t listen to critics who are sitting on the sidelines throwing advice at you when you’re the one in the arena falling down and lifting themselves back up again. If we as women don’t put ourselves in that arena, we’re never going to get there.”

“We have to get over our fears about building businesses and aiming to get investment because otherwise, it’ll never happen.”

Julia coined the phrase, ‘female-founder syndrome’, something she originally heard from a client. She explained that “one of my clients who phoned me up one day and said that an investor had told her that she was suffering from female founder syndrome. He was quite down on her, saying she wasn’t being ambitious enough. This guy contacted her a week later, saying that he had realised that a lot of the male founders he usually worked with are too optimistic about their plans.”

On Julia’s fundraising journey, “It’s changed hugely - most progressive investors now, whether they’re angel syndicates or individual investors - most are aware of the issues and are trying to be more mindful of processes, attitudes and behaviours.”

“On the founder side, I’ve seen so many more incredible female founders coming through in the last six years. The younger ones are telling me that they’re not experiencing a great deal of gender bias.

The following session dealt with the negative impact COVID has had on the female workforce.

Monica Mahay, Intel Corporation recognised the negative impact of COVID, but also recognised what it’s done to create ‘opportunities’. She explained, “it presents a huge opportunity for many men and women, myself included, who have been longtime advocates of flexible working and flexible working in itself is not the sort of shortcut but it was perceived to be for a long time, it’s actually a way that you can best utilise your time, your efforts to deliver the most for your work.”

The following session dealt with the lessons learnt from businesswomen who have reached the top.

To get to the top for Samantha Coggins-Thompson, the Chief Audit Executive of Computershare, she said “quiet determination wins the day.”

Sarah Matthew, founder of the Vibrant Company attributed her success to “persuading people by what women do and how we behave. All we can do is keep demonstrating that we’re really well qualified to do the jobs we’re doing.”

The following stream dealt with the topic of belonging, and how that’s the key to transforming and maintaining diversity in the workplace.

Kathryn Jacob of Pearl and Dean set the scene, stating that “there are more CEOs called Steve than there are women. There are millions being put into Diversity and Inclusion, but you can’t buy diversity.”

Sue Unerman of MediaCom explained why it’s easy to put more money into diversity, but difficult to get men to do more than that. “I’ve had men say to me ‘the chances of me saying something that could end my career is so high that I’m not gonna say anything. It’s a witch hunt.’”

Mark Edwards, Coach, Journalist, and Author said that if you want to “help men to become better allies, you have to provide them with a positive vision of the future, and clear first steps. You can’t go around telling people they’re wrong. You have to say that your future will be better if you make this change, this is how you do it.”

The awards showcased the business role models, advocates and mentors, as well as the inspirational women leading businesses and those ascending to new heights!

Construction Businesswoman of the Year

Consumer Goods Businesswoman of the Year

Creative Industries Businesswoman of the Year

Engineering & Manufacturing Businesswoman of the Year

Entrepreneurial Businesswoman of the Year - Sponsored by Starling Bank

Finance Businesswoman of the Year

Food & Drink Businesswoman of the Year

Social Enterprise Businesswoman of the Year

Technology Businesswoman of the Year

Transport & Logistics Businesswoman of the Year

Utilities Businesswoman of the Year

Young Businesswoman of the Year

Team of the Year Award

Role Model of the Year Award

Male Advocate of the Year Award

Female Ambassador of the Year Award

Missed a session? No problem - all sessions are available on-demand HERE