How I was an effective boss but a bad leader: Chris Kenna speaks at Ideas Fest

We often think that being an effective boss is the same as being a good leader, but Chris Kenna CEO and Founder of Brand Advance tells his story of how different those two things are, and how being just one and not the other can be detrimental to your team 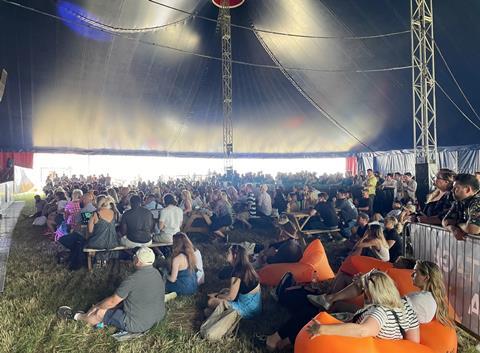 Founded in 2017, Brand Advance is helping the world’s largest brands and agencies reach diverse communities at scale, with authenticity - and they are doing so successfully with offices in 5 countries, and some of the biggest companies worldwide as their clients, including; Apple, Tesco, PrimeVideo, Unilever, and so many more.

So, to create such a successful brand in such a short space of time, Chris must be a great leader? In his words, the answer would be ‘no’. An effective manager yes, but not what he would call a good leader.

Being a good leader and an effective boss are two completely different things - and it can be hard to crack the two.

Chris Kenna took to the Ideas Fest ‘Real Talk’ stage to discuss his story and tell us why he is now enjoying ‘just being the founder’.

Since founding the brand that has reached huge success Chris has been the face of the brand, taking to every stage, every interview, and every campaign to showcase his story and the company’s work - which has left him little time to focus on his employees, and how to be ‘the best leader possible’.

“Being a boss is really easy. You just turn up and tell people what to do. They ask for guidance or direction and you tell them, but being a leader is a totally different thing,” he said.

“Good leaders should inspire people to do what they think they should do, rather than turn up and tell them what to do - and I have a bit of development I still need to do on the part.”

Growing up Chris felt as if he didn’t have any positive examples of leadership and believes this has had an effect on the way he runs his business.

“When you get told you can’t do things or grow up underprivileged you get a chip on your shoulder. And the stress of dealing with clients and running a business on top of that chip adds up, and before you know it your mental health and stability are on the decline.”

“My first step into leadership was in the military, but it’s very different because you can run a company like you’re in the army, it doesn’t work. I tried to and it went really bad, and I had to swivel very fast,” he says.

“It’s full of fantastic, much cleverer-than-me people that can do some things that Brand Advance does much better than I can to inspire people, their teams do things better than I can,” he adds.

“The separation is going to be good. I’m basically getting divorced from my company but it’s the only way that we can both live our own lives, to the fullest”

Speaking at Ideas Fest, doing what he loves Chris said, “Getting up on a stage and using a microphone is the easy part. But getting off the stage and being able to inspire and motivate 1-1 and in a different environment is the hard part.”

“You don’t always have to be the face of your business, and doing everything, if being behind the scenes, focusing on yourself and the business’s success is what is best then that’s what you should do - and that’s what im doing.”

So, it just goes to show - you may be an entrepreneur with a great business idea, but it doesnt mean you come with all of the skills to run your team in the best way possible. Take it from Chris, step back take a long at the problems and assess what can be done. Maybe you’re not cut out to be the leader, so find a new CEO to take over leadership - this won’t eliminate that this is your business.

Your employees, operations and the overall business idea are at the heart of everything, and if one isn’t working well it can have a knock-on effect on all parts.