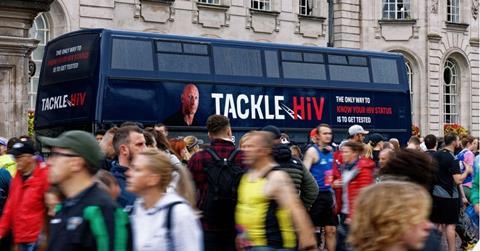 Gareth who publicly revealed he had the virus in 2019, after being told his secret was going to leak, now runs the awareness initiative Tackle HIV, which is on a mission to combat the misconceptions that live around HIV.

“We need to educate people about HIV, we need to correct the myths that exist around it once and for all and we need to break the stigma that surrounds HIV,” says Gareth.

HIV is a hugely underrepresented virus that needs far more awareness and understanding. Though the virus has come so far in recent years, with medication making it treatable, and the stigma lessening, people tend to forget that there are still around 107 thousand people suffering from the virus currently in the UK.

On his latest mission to break the stigma around the topic, Tackle HIV’s Myth Bus is currently touring the UK in order to get people talking and open the doors to conversations that may not have happened otherwise.

The Myth Bus Tour launched at the Cardiff Half Marathon on October 2 and will be visiting Manchester, Leeds, Glasgow and London to offer educational information on HIV as well as encourage and offer testing advice, information and test kits to the public.

Speaking to WalesOnline about the campaign, Gareth said: “It’s great to get the bus going and I’m excited to take it to places where you wouldn’t expect to see or have that conversation.

Talking about the topics discussed on the bus Gareth said that there are facts about the virus that will definitely surprise people. “Globally 54% of the people living with HIV are female, a few facts like that meant people were realising the importance of the message and getting this message to everyone,” he said.

The bus also has a testing station upstairs where people can get tested for the virus in a safe and comfortable environment where no conversation is off-limits!