Brad Burton is the UK’s #1 Motivational Business Speaker, founder of 4Networking, the UK’s largest joined-up national business network and author of four of the highest-rated and 5* reviewed business books on Amazon, including the famous ‘Get off your Arse’. 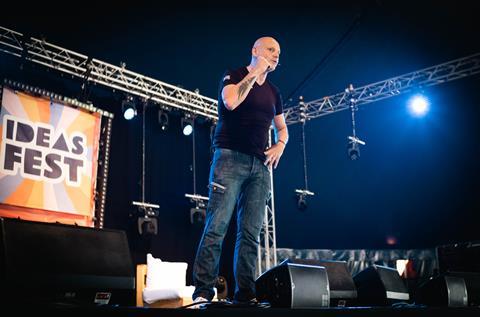 Brad is hugely successful and has been in the business world, so you would assume he had the perfect start, a great education, wealthy parents, and people who pushed him to do what he loved. Well, Brad’s life was quite the opposite - and he took to the stage at Ideas Fest to share his story, the trials and tribulations of starting your own business, and how he got to where he is today.

Brad’s life has consisted of 14 home moves, run-ins with trouble, multiple job changes, and becoming a parent, more than once - yet none of this has stopped him from achieving exactly what he wanted in life.

In 2005, in £25,000 in personal debt, Brad decided it was time for him to do what he loved. He quit his job and decided to go ahead with his start-up marketing business, with a ‘whinging wife demanding he “go get a proper job’“. But he didn’t let this stop him, he ignored her and followed his gut - and it truly paid off.

“If you don’t 100% believe in yourself then why would anyone else?” he said.

Discussing the start of his business he said: “Nothing prepares you for what running your own business is like”

“Within a week of quitting my job on a mission to get my startup going, I was delivering pizzas to keep myself afloat, but you have to do things you don’t want sometimes to get where you want to be”

“I remember starting out people would laugh and snigger at me and my ideas, yet it went on to become a multi-million-pound business. Not everyone is going to agree with you or understand you, you need to ignore these to get you to where you want to be.”

Overcoming caring about people’s opinions and expectations of you is a huge factor in achieving success as a first time entrepreneur - as people will question your knowledge, drive and will expect failure. Brad is a shining example of how when you focus on yourself, and what you love then no one can stop you. Brad told the crowd how choosing positivity over giving in to the feelings of defeat helped him get to where he is today.

“The biggest fight you’re going to have to deal with is the fight of what version you want to present, either the negative, self-deprecating side or the positive, go-getting side. If you win this fight with yourself you will have the time of your life.”

“Take me for example, a former drug addict, who’s been shot at, and has no qualifications - yet I’ve sold 4 books? This wasn’t luck, this is because I had a change of life, and I chose to push forward,” he said.

“Every single decision you’ve ever made in your life has brought you to this moment,” he explains.

He uses himself as an example for this analogy, if he hadn’t have chosen to quit his job, ignore the negativity in his life, leave his old life behind, and move cities - his life could have been very different. Everything you do in your life is a choice, and making the right decisions for YOU will put you on track to achieving the life you want.

Speaking to the crowd he shouted about the importance of saying yes and pushing yourself out of your comfort zone! “I want people to start saying yes” he said. “Start saying yes to those things that you’re not sure of and the things that scare you, because you never know where it will lead you.”

Brad’s talk was truly inspirational, and the crowd were left buzzing with motivation, ready to take the next steps on their journey.