“Any entrepreneur building something great will fail more than they succeed and you have to be okay with that,”: Conversations that matter with Michael Acton Smith’

Michael Acton Smith OBE is the current co-CEO and co-Founder of Calm, a meditation space company. He is also the founder of Firebox.com, and founder and chairman of children’s entertainment company Mind Candy – the creators of Moshi Monsters. 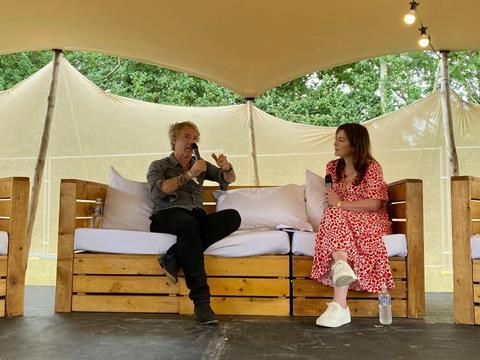 Michael is a huge advocate for mental health and wellbeing and created Calm, the first of its kind meditation app that has taken the world by storm.

Michael joined us at Ideas Fest on our Conversations that Matter stage to speak intimately with the crowd about his entrepreneurial journey, the creation of Calm and his future.

To kick off the conversation he discussed how Calm came about, and how being the first of its kind came with its challenges. “I was really really burnt out from my previous roles,” he said.

Being in an entirely different field previously that is fast-paced, cut-throat and often exhausting, Michael found he was struggling with the effects of burnout, which was having negative effects on his mental health. After speaking with a number of different people, he began meditating to help with his mental health and saw huge differences - he thought that this needed to be shared with the world - and from there Calm was born.

“As a founder, burnout is a serious issue because you never really get a chance to switch off - but you need to! You need to prioritise your mental health because this isn’t something that isn’t going away in a day or a week, your business is here to stay, so you can’t let your mental health suffer for that long”

He encouraged people to switch off - literally, saying “Did you know, 80% of people go on their phone before they’ve even left their bed in the morning? I now try not to switch on my phone before I’ve left the house, and I have a far better morning because of it.”

Being the first of its kind, many people were sceptical of the idea of Calm, and getting funding wasn’t the easiest - as it is for many businesses these days.

“When we started out people didn’t really understand meditation and what we were trying to do with Calm, so it was hard for people to take us seriously and hop on board - but we believed in it and that was the main thing. Once it’s clear that your business is working it then becomes a thing of saying no to investment, and turning people away.”

“Any entrepreneur building something will fail more than they succeed and you have to be okay with that,” said Michael. “Startups are good at getting back on their feet, and you have to know when it’s time to get up and go again”

When asked his top tip for entrepreneurs, Michael said that your team is your key player. “Hire slowly and fire fast when things aren’t going well. One wrong employee can be detrimental to your process and your success.”

“Look, we were the first of our kind, and there are now 26, so it shows that if you have a good idea that you believe it - go for it,’ he said.

He recommended a book for all entrepreneurs who may be in a similar situation that he was when he started Calm. “Every entrepreneur needs to read ‘Build by Tony Fadell’ and a blog written by Ben Horowitz, named ‘The Struggle’ - every business goes through and needs to go through struggles, and this book helps you know that you’re not alone.”

Calm has now taken off and is a hugely popular business, but the crowd were interested to know if Michael has plans to do anything in the future. “When you’re running a business you always have to look at what’s next. The world is changing, so our app is always going to be our central focus, but now we’re looking at how can we take this further? We’ve thought about maybe creating our own psychedelics because of the benefits they can have, and also a Calm Hotel!” - Which we personally hope comes to life because we can only imagine how amazing a Calm-themed hotel would be.

The crowd we’re so engaged with Michaels’s talk, and he continued to spout his wisdom after the talk as he stuck around to answer questions, and give tips and tricks to anyone that wanted his help.

Interested to hear from people like Michael and hear true, meaningful conversations? - Ideas Fest is the place to be. See what else went down at Ideas Fest here, and book your tickets for next year here.