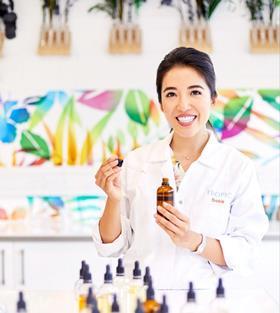 Susie Ma is the Founder and CEO of Tropic, one of the UK’s fastest-growing skincare brands.

At 13 years old, Susie and her mum moved to the UK, and it wasn’t long before they were struggling to make ends meet. Keen to contribute to household bills, Susie decided to take the plunge and start her own business, aged 15. She borrowed some money from her mum and invested in ingredients to whip up a batch of body scrubs using a family recipe, to sell at Greenwich market alongside her mum’s stall. On the first day, Susie sold out of all 50 body scrubs, raising enough money to pay the bills for a whole month. Motivated by this initial success, she continued to spend weekends and school holidays at London’s markets selling the original body scrub. Tropic continued to grow, and by the time she reached 21, Susie had helped to fund her studies at university, bought her mum a house, and purchased her first investment property. Today, the body scrub is one of Tropic’s bestsellers, Body Smooth Refreshing Polish, and uses the same effective ingredients as it did years ago.

Tropic officially launched in 2011, following a £200,000 investment from Lord Alan Sugar, which allowed the brand to scale up production. In 2013, Susie considered a route-to-market that allowed the company to continue producing freshly made skincare, and subsequently launched the business’ Ambassador Opportunity. Following 400 initial sign ups in 2013, Tropic now have a family of over 14,000 passionate Ambassadors that have helped to take the business from strength to strength by selling Tropic products nationwide.

Susie remains the primary formulator behind all of the brand’s products, and spends much of her time experimenting with new formulations in Tropic’s Innovation Lab, taking feedback from Tropic Ambassadors and customers to continually improve and develop. She has developed over 150 proprietary products, including skincare, hair care, sun care and body care, with new launches released twice a year at Tropic’s dazzling ‘Glambassadors’ events.

Susie aims to be a force for good beyond beauty, and is committed to Tropic’s infinite purpose, which is to create a healthier, greener, more empowered world. Tropic are a certified CarbonNeutral® company, and have doubled their carbon offset since 2018, effectively becoming ‘carbon negative’. Susie loves animals and was driven to apply her passion for animal welfare to her business. So, Tropic stands with Cruelty Free International, PETA and The Vegan Society, to ensure no animals are harmed or caused distress in their name.

Susie’s impressive business acumen secured her a coveted spot on the Forbes 30 Under 30 list for 2018, and her work in line with Tropic’s infinite purpose earned her an EY Entrepreneur of the Year award for ‘Building a Better Working World’.