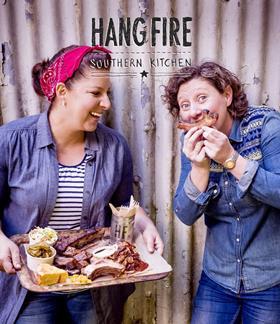 You can’t talk about UK barbecue without mentioning Samantha Evans and Shauna Guinn. The pair have become synonymous with celebrating all things outdoor cooking. They started taking their cooking to the masses out in 2013 following a 6-month pilgrimage to the Southern United States to learn the art and science of slow and low American barbecue. Following their popularity of a consistently sold-out kitchen takeovers or street food events, they went on to win BBC Food & Farming Awards ‘Best Street food’ in 2015. That year they wrote their first cook book about their adventures in the US and divulging the secrets behind perfect American BBQ. In 2017 they opened their first restaurant ‘Hang Fire Southern Kitchen’ in Barry, Wales and has been a fully booked restaurant for 3 years. In October 2018 they won the coveted ‘Observer Food Monthly Best Restaurant’ award and the NatWest Great British Entrepreneur of the Year Award. They also have 3 series of their own cookery show on BBC One Wales called ‘Sam & Shauna’s Big Cookout’ celebrating communities of volunteers through a big outdoor cooking party, they’re shooting their third season this year.