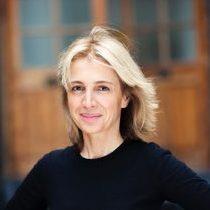 Sahar Hashemi studied law at the University of Bristol, and left her legal career in a top London law firm after five years to start Coffee Republic, the UK’s first US style coffee bar chain with her brother Bobby.  In 5 years, they built it into one of the UK’s most recognised high street brands with 110 bars and a turnover of £30m.

She left the day-to-day management of Coffee Republic and published a bestselling book about her journey, Anyone Can Do It,  to demystify the idea that entrepreneurship is an innate personality trait, which has been translated into 6 languages and is the 2nd-highest selling book on entrepreneurship after Richard Branson.

She then founded Skinny Candy, a market-segment defining brand of sugar free sweets which was sold to confectionery conglomerate Glisten PLC in 2007.

Her latest booked Start-Up Forever, How To Build A Start-Up Culture In A Big Company,  released in March 2019, was named The Financial Times Best Business Book of the Month.    Start Up Forever has been much acclaimed in the corporate world by throwing away the excuses which normally stifle entrepreneurial culture and providing a practical easy to implement toolkit to unleash the agility and innovation of entrepreneurial thinking which all large companies need.

Sahar was nominated by Director magazine as one of its Top 10 Original Thinkers, alongside Sir Tim Berners-Lee and Sir Jonathan Ive.  She has been named “Pioneer to the life of the Nation” by Her Majesty The Queen and Young Global leader by the World Economic Forum. She was listed in the Maseratti 100, a definitive list of Britain’s most successful philanthropists, investors, mentors and advisors.

In June 2012 Sahar was awarded an OBE for services to the UK economy and to charity.

She has recently co- chair of the Government Scale Up Taskforce and sits on the board of the Scale Up Institute.  She is patron of Child Bereavement Charity UK and on the advisory board of the ECB HUNDRED Cricket Competition, BFC Fashion Trust and Change Please Coffee, a social enterprise that trains and hires homeless people to run coffee carts.