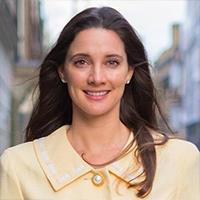 Hermione Way is a brand consultant who helps companies big and small accelerate growth of their brand. With over 10 + years’ experience marketing in the technology industry, she has helped her clients with campaigns that have gone viral, amassing millions of views and appearing on BBC World News, NYTimes, Wall Street Journal, TechCrunch and many more top level publications.

As the former Head Of European Communications at Tinder, Hermione helped grow the brand across the UK, France, Germany, Russia, Spain & Italy. At Tinder she worked on forging first of a kind partnerships with the NHS and a voting engagement initiative for the 2016 EU Referendum.

She was the main cast member of the show Startups Silicon Valley, a $25million budget TV show, broadcasting to 88 million homes on the Bravo TV network.

She founded her own PR and Marketing company Waymedia.co where she worked with clients from China, USA, Canada and Europe, helping them appear on Wired, Women’s Health, VentureBeat, DailyMail and Fortune Magazine.

She was the founder of Hollywood Meets Silicon Valley, an event series connecting the two industries. She was the co-founder of Startup World, a global startup competition held in 25 countries, sponsored by American Airlines.

She has appeared on the front cover of the New York Times and The Sun Newspaper. She has blogged for TechCrunch and appeared on Sky News as a commentator on latest technology trends.