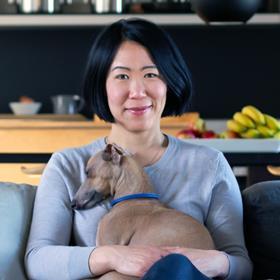 Christine Chau is an ‘accidental’ entrepreneur who co-founded the award-winning luxury dog bedding company, Charley Chau, with her sister Jenny in 2010. A quirky little hobby that started out making beds on the sitting room floor for her Italian Greyhounds now has customers in over sixty countries around the world.

Charley Chau focuses on designing and making dog beds that are super-comfy, stylish and practical. Elle Decoration has listed the brand as one of the top pet companies in the world.

Christine and Jenny are also previous winners of the GBEA UK Family Business Entrepreneurs of the Year award.

Prior to founding Charley Chau, Christine spent many long years in marketing in the City before moving into the public sector to run Marketing, Events and Sponsorship for the Mayor of London in the build up to London 2012 – a remit that was as diverse as shooting fireworks off the top of Big Ben on New Year’s Eve to handling crisis communications to Londoners affected by the 2011 riots.

Away from Charley Chau, Christine is most happily found walking her dogs or providing mentoring and coaching support to other female founders in the early stages of their businesses.