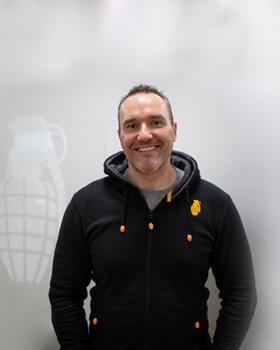 Alan has had a lifelong journey with entrepreneurship starting at the age of 11 when he was nearly expelled from school for selling cakes in the playground to his fellow pupils.

He managed to resolve the situation by negotiating a deal to sell to the teachers at preferential rates, and it was at this point he realised he wanted to work for himself and that his powers of persuasion were a valuable asset and that he was also unemployable!

30 years later he still selling snacks, albeit now healthy ones, with the Carb Killa range of bars having become one of the top selling items in impulse confectionary in the UK.

He has worked in every sector within health and fitness from being a personal trainer and managing privately owned fitness clubs, to pioneering the UK sports nutrition market by importing and distributing US made products before co-founding Grenade® with his wife, Juliet Barratt, in 2009.

Following a plane crash in the late 90’s, Alan decided learning to fly would not be a bad idea, and still retains his Private Pilots Licence to this day, now owning a Cirrus high performance aircraft he flies most weekends and for business trips as much as possible, with an emphasis on the number of take offs being equivalent to the number of landings!

He is a huge fan of all things military, hence the name Grenade®, and is happiest when shooting either clays or long distance targets and whenever he has the opportunity to blow something up (legally preferably) although he doesn’t discriminate…..

He is an avid car enthusiast, with a collection spanning unusual 4x4s to Lamborghinis, and is just as passionate about training as ever, for both physical and mental wellbeing.

He is also keen to nurture and encourage entrepreneurship in the UK and would be keen to advise and invest in start ups in the future when time allows providing its an amazing product or service run by passionate individuals.